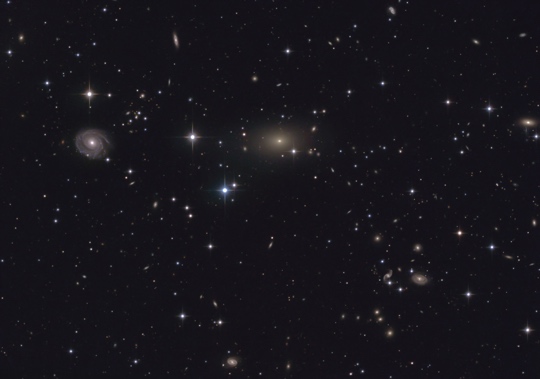 This finder chart should help you locate these galaxies.

If Corona Borealis pops into the deep sky observers mind it is either because it is on the way to Hercules or because they are hunting the challenging Abell cluster AGC 2065. Home of numerous faint galaxies even in the standard references Corona Borealis hardly gets a mention.

This months challenge however are the two faint galaxies NGC 6085 and 6086 which form the core of the galaxy cluster Abell 2162. Both of the objects were discovered by Albert Marth using William Lassell’s 48" speculum telescope from Malta and were described by him as quite faint so you need to be up for the challenge.

NGC 6086 is a giant elliptical galaxy classified as a cD is at the centre of AGC 2162. Recently NGC 6086 has been shown to a harbour a billion solar mass black hole, although depending on the amount of dark matter involved that mass may drop. It also appears to be one of the brightest galaxies in the nearby universe.

NGC 6085 is a face on spiral, although except with very large telescopes, it will probably only show the core region. There are suggestions that NGC 6085 may also be a Seyfert galaxy, however this may just be a misreading of a number of papers on Seyferts where NGC 6085 was used as a control galaxy.

These two galaxies are by far the brightest members of AGC 2162. All the other members are substantially fainter as can be seen by the fact that perhaps only another half dozen made any of the older galaxy catalogues such as the UGC or CGCG. Neither the NGC galaxies nor the cluster itself make any of the venerable references such as the WSDSO Vol. 5 or, L&S or NSOG.

Abell 2162 itself is part of a filament of galaxies that joins the northern and southern Hercules superclusters together. For an expanded history of this supercluster try the atlas of the universe. This group of clusters along with the Coma supercluster have been nicknamed the Great Wall. Deep images seem to suggest that like the better known Hercules cluster Abell 2151 Abell 2162 does have a high proportion of spiral and lenticular galaxies.

Both NGC 6085 and 6086 are going to be challenging to see visually although there are a number of nice images of the field. Give it a go and see what you can find.

There are plans created for all the Galaxy of the Month pieces from 2011 onwards. To download click for Astro Planner or SkyTools. These can be loaded in to the appropriate programs so that it may be easier to find what galaxies have been covered so far. These will be updated as new GOM’s are added.