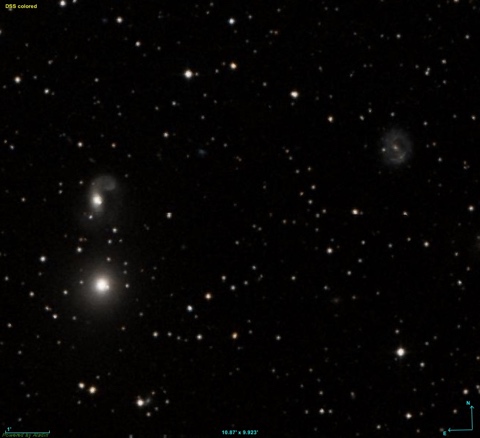 This image the NGC 2275 group was provided by the Sloan Sky Survey, and this finder chart should help you locate these galaxies.

Finding galaxies in the winter constellation is always a challenge as most are quite faint and in general overlooked. With Gemini riding high on the meridian on February nights the challenge was to find a galaxy that was not really just for imagers. The NGC 2274/5 pair seemed to be a good challenge. There are not many observations of this galaxy pair and it is not included in either the NSOG or L&S. Both galaxies were discovered by William Herschel (who else ☺) in 1786.

NGC 2274 is the brighter of the two being an elliptical galaxy. At 12th magnitude this may be a challenge to find. Its companion NGC 2275 is actually much fainter and is an unclassified spiral. It appears to be undergoing some form of interaction as one of its spirals arms is much more obvious than the other. I am sure it would have made Arp’s famous catalogue if it was a brighter pair.

The pair is actually part of a small group of galaxies which has been variously catalogued as LGG 139 or WBL 121. The group consists of the four galaxies, NGC 2274, 2275, 2290 and UGC 3537. NGC 2290 is actually quite a distance from the others at 47’ of arc away. It appears with another group of galaxies which are in fact unrelated. NGC 2290 was also discovered by William Herschel but in 1793. The separation is due to the fact that the group is relatively close to us at about 4.6 Mpc so the group is spread out on the sky.

NGC 2274 and 2275 have been reported with apertures as small as 15cm from very dark sites but I suspect that probably 30cm will be needed from most normal sites, certainly to see NGC 2275. The other galaxy in the group UGC 3537 appears to be a face on spiral and is quite faint and is going to be a challenge to see unless you have a large telescope or use video or CCD imaging. 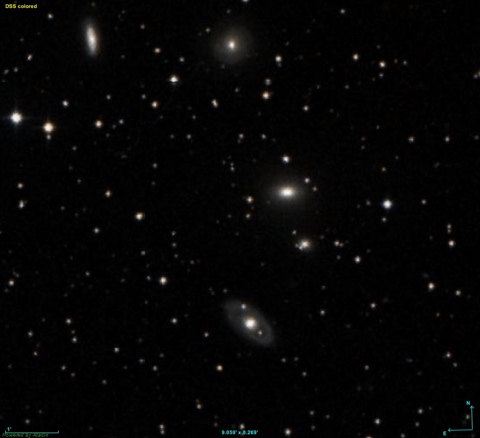 This image of NGC 2290 was provided by the Sloan Sky Survey.

The group of galaxies around NGC 2290 will also make a nice target but will be a challenge for large telescope owners as these galaxies are much fainter.