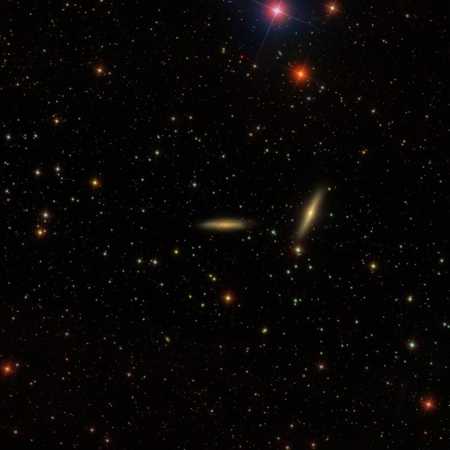 This image was provided by the Sloan Sky Survey and this finder chart was produced using Megastar 5.

NGC 7332 and NGC 7339 are an isolated bound pair of galaxies about 67 million light years away. NGC 7332 is lenticular galaxy with a boxy nucleus. Lenticular galaxies have a light profile that makes them look like spiral galaxies but they have no gas and new stars. They are usually found in large galaxy clusters where it is believed that the gas is stripped out by ram pressure as the galaxy moves through the intra-cluster medium. It is relatively unusual to see them in isolated situations like this.

NGC 7339 is an edge on spiral that is unusually blue. The pair form number 57 0 in the catalogue of double galaxies by Karachentsev. Although NGC 7332 and 7339 appear to be a dynamically interacting pair there are no signs of tidal distortions in the system so the orbit is currently fairly wide. Deep radio observations of the system also show no evidence of tidal interactions although they have turned up some new dwarf galaxies associated with the pair. They do however show a stream of gas in NGC 73339 which could be the remains of a merger event which could account for the current star formation episode in it. Recent surveys looking for globular clusters suggest that both galaxies have a small number ~175 for NGC 7332 and perhaps 75 for NGC 7339. NGC 7339 was also home to supernova 1989L. Both the galaxies were discovered by William Herschel in 1784. NGC 7332 is catalogued as S0(pec) because of the box like shape of its nucleus. The box could be evidence for a bar in the galaxy. Unusually for an S0 type galaxy NGC 7332 does show evidence for a large amount of ionized gas so it maybe a young version of this type. NGC 7339 is probably an Sbc type spiral but is features are fairly low contrast.

Both these galaxies are relatively bright and should be visible in telescopes of 20cm or above aperture from typical UK skies. The galaxies are an interesting pair because they are at right angles to each other. It should be noted that NGC 7339 is the fainter of the pair whne seen visually. It may be possible with larger telescopes to make out the box like shape. Of the nucleus of NGC 7332. They make a nice pair to warm up with before going are more challenging targets.