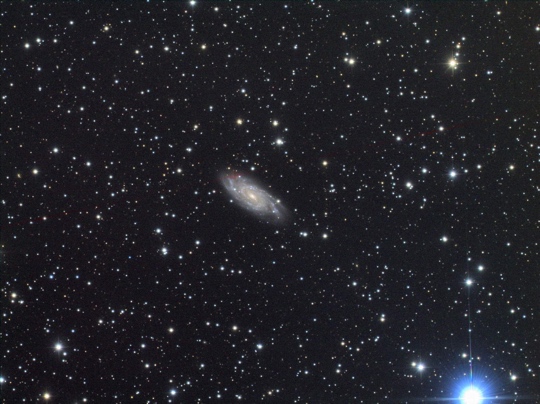 Summer is not the best time for viewing galaxies as the northern skies never really get dark and the sky is dominated by the Milky Way and its attendant star clusters and nebulae. There are however some galaxies to be seen and my choice this month is the galaxy NGC 6118 in Serpens Caput.

First discovered by William Herschel in 1785 this is a nearly edge on spiral galaxy. Classified as a grand design spiral NGC 6118 is believed to lie at a distance of about 83 million light years and at that distance its size would be about 110000 light years across, making it almost the same size as our Milky Way.

Its full classification is SA(s)cd suggesting it has tightly wound spiral arms along with a small bar. Deep images show that it has a lot of star formation going on in its arms which are highlighted by the blue star clusters.

In 2004 NGC 6118 was host to the type Ib/c supernova 2004dk. These are relatively unusual objects that are thought to occur in binary systems where mass is stripped from one star by the other.

Unusually NGC 6118 does not appear to be part of any galaxy group but appears to be an isolated field galaxy. As such it is of interest is determining how galaxies evolve when found in isolation rather than the usual groups.

As the galaxy is large and faint it can be a challenge to see with smaller telescopes and has earned the name of the Blinking Galaxy because of its tendency to flicker in and out when different eye positions are used (I suspect this is a reference to the use of averted vision). Even though its total magnitude is fairly bright the size of the galaxy suggests that its surface brightness will be quite low and you will need a medium/large aperture telescope and a dark sky to see more than the core. It is regarded as one of the toughest of the Herschel 400 objects to find because of its faintness. Strangely based on this it appears in Michael Bakich’s book 1001 Celestial Wonders to see before you die !!.