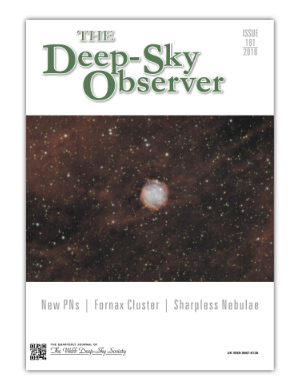 Object of the Month : M104 in Virgo by Wolfgang Steinicke

I apologise for the lack of DSOs over the last year. This has partly been due to lack of material and partly due to circumstances. Hopefully in 2019 we can get back on track, although I still need more material.

The society is still growing which is good and we have plans to be at a number of events in the UK, including the new Practical Astronomy Show on the 9th March. Unfortunately many show organisers seem to be putting their shows on dark of Moon weekends that are normally used by star parties. Whether this is laziness or a just-don't-care attitude because they feel most observers are imagers and can observe when they like I don't know.

We had the same issue with the IAS show in 2018, although we decided in the end not to go because the costs were too high compared with what we got back. The same will apply in 2019 I think. I did go myself as an attendee and saw far fewer traders and people there than previous years. I am not sure if this is due to the economy or just a long run of bad weather, the Brexit effect or, of course, people have everything.

There was very little new equipment on show now although I did have some good discussions with Phyllis Knight about the new Deep Sky Planner Mobile Edition that hopefully will be released sometime in Q1 2019.

Since the last DSO Greg Crinklaw did release the Skytools 4 Imaging Edition however there is no sign or date yet for the visual version. As I expected he is now being overwhelmed by support requests from imagers who know little about either astronomy or imaging but want the latest cameras added and control issues with all the odd ball scopes that are out there. I have a bad feeling that we may still be discussing the non-arrival of this software in late 2019 which is a pity because there is a vast improvement in both the charts and database with V4.

On the software front there has been the release of Starry Night Pro/Plus 8 which includes new databases (allegedly tied in with those in SkySafari) and the ability to merge lists and equipment through LiveSky with SkySafari.

As noted in the last DSO there have also been very few books on deep sky observing published.

The 'Interstellarum Deep Sky Guide' did come out and we have reviews of that in this edition of DSO. Cambridge University Press (CUP) also released the 5th Edition of 'Turn Left at Orion' and there will be a review of that along with the new Covington book on DSLR Photography in the next DSO. I hear that Bob Argyle’s latest Double Star book will be available in June and hopefully available for purchase at the society’s AGM. WB also brought out the 6th volume of the Annals series which you can also get through the society. Unfortunately they now seem to be down to a publishing rate of one a year. This one does cover the Coma Galaxy cluster though.

As an experiment we will be carrying a range of CUP deep sky related titles at the shows we visit.

Springer seem to have continued in their strange way of vanity publishing. These seem to come in two groups, ludicrously expensive books in the Historical and Cultural range with prices ranging up to £150 per book and the vanity publishing in their popular astronomy ranges. There seem to be no new books here on deep sky observing, which is probably a good thing given the quality of their publishing and the fact that you seem to have to know nothing about a subject to publish a book on it.

There do seem to be increasing opportunities for self-publishing and Wolfgang is hoping to have a new book out by the AGM on deep sky observing. I also came across an interesting book by Adrian Ryder on George Johntone Stoney, one of Lord Rosse's assistants at Birr who discovered many new nebulae and it gives an interesting account of the frustrations that the observers had there with the weather.

We are looking to bring a couple of new publications out this year including a book form of the GOM articles and hopefully a 2nd volume of Astronomical Delights.

There is now a full set of speakers up for the society’s AGM in June. I hope to have DSO 182 out by then as well. I must thank Patrick Maloney for the help he gave on looking through some of the articles in this edition of DSO.