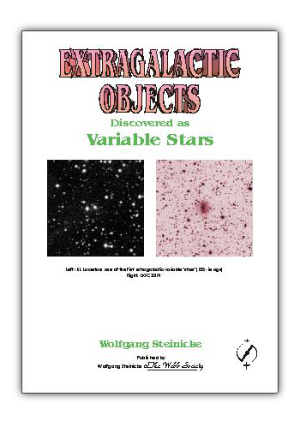 Thousands of variable stars have been discovered over the past 300 years. The great majority are members of our galaxy. In the 20th century some fascinating objects were found, which turned out to be not stars but extragalactic systems, mostly at cosmological distances: galaxies, quasars or BL Lacertae objects. The recorded brightness variations are due to violent processes in their kernel regions. Excluded are all extragalactic variable stars, novae or supernovae.

The 24 cases known to me are presented. All were discovered, classified and catalogued first as variable stars. Most of them (18) are listed in the General Catalogue of Variable Stars (GCVS) [1]. For each object the history of its discovery as a “variable star” and the identification with an extragalactic object, often listed previously as a radio source or galaxy, is discussed. Many systems were catalogued as long-period giants, irregular or cataclysmic variables. Due to their stellar appearance and classification, there was neither need nor time for a detailed physical analysis. So the objects spent their lives as anonymous entries in the catalogues, waiting to be uncovered some day.

In 1968, the first two objects were identified, nearly at the same time. In the 60s astronomers searched intensively for the optical counterparts of radio sources on the Palomar Observatory Sky Survey (POSS). This was possible, when more accurate positions were measured by interferometric methods. In 1965 Arp and Burbidge found, that 3C 120, a radio source detected at Cambridge in 1959, is a Seyfert galaxy at z=0.033. Penston noticed in 1968, that the object is identical with the variable star BW Tau in the constellation Taurus, discovered in 1940 by Hanley and Shapley at Harvard College Observatory. The second case was BL Lac, a variable star in the constellation Lacerta, found by Cuno Hoffmeister in 1929 at Sonneberg. In 1968 Schmidt identified it with the radio source VRO 42.22.01, detected at Vermilion River Observatory in 1965. The next cases were AP Lib and W Com, uncovered in 1971 as remote BL Lacertae objects.

It often took a long time between discovery and identification. For 59 years the variable X Com was known (Max Wolf 1914), until Howard Bond noticed its extragalactic nature in 1973. Bond was most successful in his search for extragalactic variable “stars”, identifying seven of them, followed by Margon and Deutsch with four objects (Meinunger’s “nicht rote” objects). Most of the variables were discovered at Sonneberg by Ludwig Meinunger (6), Cuno Hoffmeister (5) and Herta Gessner (1); see Hoffmeister’s classical book [2].

The largest amplitude of all objects shows W Com, which changes by 6 magnitudes, with a peak magnitude of 11.5 in 1916. On the other hand AU Leo is an object found to be constant in brightness by Bond. The published variations were due to plate flaws. The most distant object in the list is the quasar NSV 6388 at z=1.58, discovered by Heinrich (1967) and identified by Meusinger, Scholz and Irwin (1999). The nearest one might be S10838, discovered by Gessner in 1985, which is identical to the galaxy UGC 3374. Due to its nonstellar appearance, she suspected an extragalactic nature, which was confirmed in the same year.

There were several cases in which the identification was the result of a systematic search for coincidences between the GCVS and radio source or galaxy catalogues (e.g. AP Lib, V1102 Cyg). Bond [3] also investigated some objects, which are not known as radio sources, but no new cases were discovered.

This work marks the present situation. A considerable amount of the data might be new for amateurs or even for professionals. To my knowledge, this is the first detailed compilation of the subject. A few objects are also presented in Volume 4 (“Galaxies”) of the Webb Society’s Deep-Sky Observer’s Handbook [4]. Finally some cases are discussed, which do not meet our definitions.