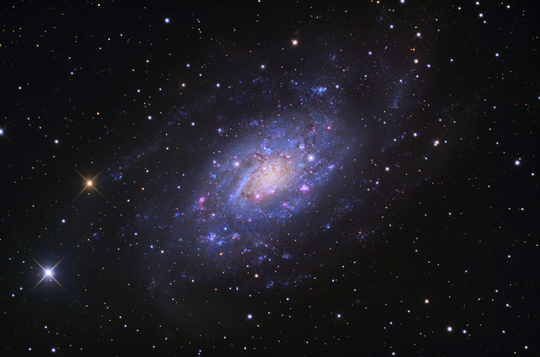 Image Courtesy of Adam Block/Mount Lemmon SkyCenter/University of Arizona. For more images from Adam Block please visit his website. You can click on image for a high resolution version, or download our Megastar© finder chart.

Camelopardalis is a large winding constellation with no bright stars. It does however have a number of interesting galaxies one of which, IC 342, we have already covered in a recent galaxy of the month piece.

NGC 2403 was discovered by William Herschel in 1788 and it is believed to be an outlying member of the M81 group. NGC 2403 appears to be the second largest galaxy in that group after M81.

NGC 2403 was the first galaxy outside our local group to have Cepheid variables identified in it, in this case by Alan Sandage using the Mt Palomar 5m (200") telescope. His initial measurements placed the galaxy about 8000 light years away, far less than the current value. NGC 2403 is thought to be similar in size and shape to M33 being about 50,000 light years across and about 3.5 Mpc away.

It has had 3 supernovae in the last 70 years including one of the brightest in recent years in 2004. There is however a possibility that the supernova seen by Zwicky in 1954 was not a true supernova event but an eruption similar to that experienced by the LBV Eta Carina in the first part of the 19th century.

The galaxy has numerous large open stars clusters and HII regions as shown in this magnificent NASA APOD image which combines data from the HST and the 8m Subaru telescope. The cause of the star formation appears to have been a recent merger event possibly with NGC 2404, although this may just be a giant HII region and cluster in NGC 2403 similar to NGC 604 in M33. NGC2403 is classified as SAB(s)cd.

Dynamically the galaxy is of some interest as it seems to have the normal gas component in the disk but there appears to be evidence of large amounts of gas flowing into the disk from a halo, perhaps analogous to the high velocity clouds we see in our own galaxy, although here the amounts involved are much greater and could be part of the reason for the enhanced star formation.

Visually it is quite a bright object and can be seen in binoculars from a dark site however larger apertures are needed to see any detail. NGC 2403 also has one of the few extragalactic globular clusters that may be seen visually in F46, although a large telescope will be needed for this. Use of a UHC filter may also help to bring out the HII regions.