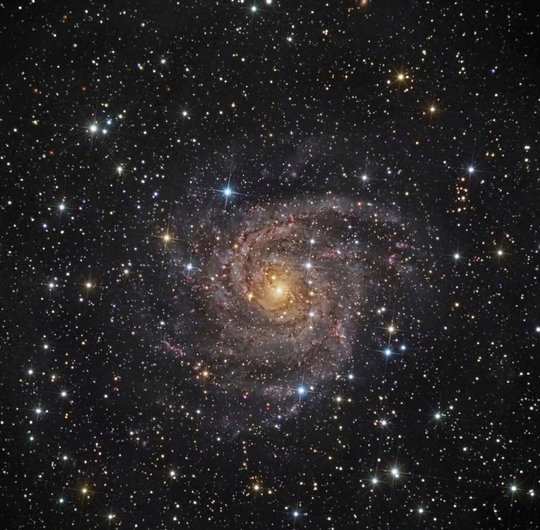 IC 342 was first discovered by the English astronomer W.F. Denning in 1890, although the observation was published two years later. Denning used a 10" reflector to discover IC342 and observed from Bristol. Although Denning was primarily known as a comet hunter but he also discovered a further 17 other objects that made their way into the IC catalogue.

The IC342/Maffei 1 group is the nearest galaxy group to our own and has probably had an impact of the evolution of our own local group through its gravitational interaction.

Unfortunately IC 342 is located very close to the plane of the Milky Way so it is nowhere near as spectacular as it would be if its light was not so severely attenuated by the dust. An image of how the IC 342 might look if dust did not obscure it so heavily can be seen from an infrared image taken by the WISE satellite. A stunning visual image can be seen at NASA's APOD.

IC342 is inclined at an angle of 11 degrees to the line of sight and as such is almost face on. IC342 appears to be a large spiral galaxy similar to our own Milky Way and M31 and has several prominent HII regions in its spiral arms which suggests it has undergone a recent burst of star formation. Unusually perhaps the core of the galaxy also appears to have undergone a recent burst of star formation.

With the exception of the two Magellanic clouds IC 342 maybe the third largest galaxy in terms of angular size known, and the fact that IC 342 is both face on and large makes it a challenge for visual observers, think M101 but much harder. It maybe that only the core can be seen as this is fairly star like and to observe the diffuse halo will require very dark and transparent conditions.

Stephen O’Meara however claims to have seen it and its spiral arms with a 4" and to have seen the galaxy through 10x42 binoculars. Due to its size and faintness it maybe that the galaxy is better seen with low power rather than the higher powers normally used. Certainly I found it non trivial with a 22" at Kelling which perhaps tells its own story on the skies from the UK.

IC342 is however a fine target for imagers. There is a more distant galaxy nearby that may only be visible to owners of large telescopes and this is UGC 2826.