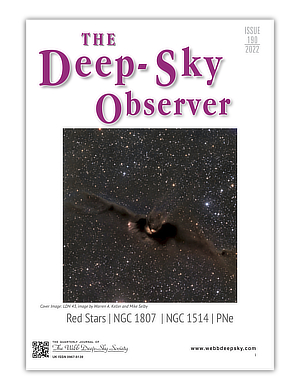 Object of the Season: Planetary Nebula NGC 1514 in Taurus by Wolfgang Steinicke

The Red Stars by Owen Brazell

Planetary Nebulae beyond the NGC/IC by Owen Brazell

I hope you had a good summer of observing. The weather here in the UK has been poor so not much has been done, by myself at least. It has not been helped by the increasing inaccuracy of the weather forecasts in terms of planning observing. I must apologise for the shortness of this edition of DSO but we have had almost no material in. I must admit I was somewhat worried that this might happen after two years of Covid as people either did not get out observing again or were just publishing their material on blogs and on forum threads. This has been an issue facing all print magazines in the recent past but I really do rely on people sending me material as I cannot continue to write most of DSO myself. I know there were some murmurings about DSO 189 about the fact we published two EAA articles and people felt that was not the right way to go but again I can only publish what I get.

We had a very successful Annual Meeting at Cambridge and it was good to see more people there than I had feared given the age of the membership and the fact that Covid is still around. We hope to have next years meeting at the same place but the IOA are reluctant to confirm so we may not know until the end of January if we can hold it there. We do have a good line up of speakers set up so far though. I know people ask if we can stream the meeting but we have no-one trained in the technology to do this and the feeling is by having it online we may reduce the number of people at the meeting.

We were at a number of shows this year and certainly again at the main show, the IAS in Warwick, the numbers of attendees was well down and given the costs of these and the fact that we are struggling to get people to help we probably will cut down on our show attendances next year.

On the technology side there has been very little new that I am aware of coming out. I guess that the software out there as far as visual observers go has pretty much reached it limit. It was disappointing that SkySafari 7 really only updated its UI and added social media features rather than updating its databases which remain the same as SS6. There had been hope that the 7.1 upgrade would fix this but it has been pushed further back. There have been no real updates to SkyTools 4 either and although there is a 4.1 update in the works it is likely to be mid 2023 before that appears. Most, if not all, software development also seems to be going into imaging programs. I guess that is the way the world is turning.

On the book front too things have not moved on either as far as deep sky observing is concerned. The AAS are slowly getting the Willmann-Bell books back on sale through shop@sky and there are rumours that Annals 9 may be out before the end of the year, but that will focus exclusively on the Magellanic clouds so may not be of much interest to northern observers. Vol 10 had also been hoped to be out before the end of the year but that has been pushed back to 2023. Otherwise in the English language world not much has come out that I am aware of. I am not sure if the main publishers have lost their zeal and people are self publishing or there just aren’t any books being written. Either way if you come across a book on deep sky observing I have not mentioned left me know. Even Springer seem to have stopped publishing books on the deep sky. Oculum in Germany seem to be selling more German language deep sky books many of which are quite nice. They have also published a light pollution map for Europe in English which may be useful when deciding where to go on holiday. I do note a new person called Agnes Clerke is publishing both printed and downloadable books on both deep sky observing and double stars. It is not clear who this person is but their knowledge of astronomy does not appear to be high. I see that Erich Karkoschka is publishing a new version of his Observers Sky Atlas due H1 next year.