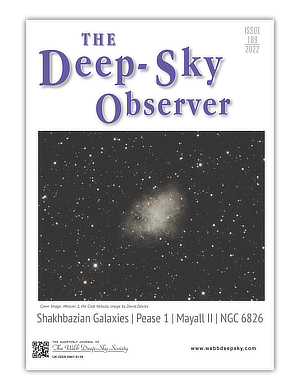 Object of the season: Planetary Nebula NGC 6826 in Cygnus by Wolfgang Steinicke

Minkowkski and his Planetary Nebulae by Owen Brazell

The past couple of years have been tough ones for the Society, along with many others, with the cancelling of the Annual meeting for the last two years and the lockdowns reducing the number of opportunities to go out and observe. This has also meant that we have not got out the number of DSOs that we would have liked in this period due to the fact that without people observing we have not had the range of articles to be hoped for. It is good however to see the membership growing and hopefully with the shows and star parties starting up again we can see some form of end in sight. I must also make a mention of the sad and unexpected death of Tim Walker. Tim was our first web master and also scanned all the older Webb publications so we could have the Webb Archive DVD. Another recent death to be noted is that of Ron Arbour. Ron founded the BAA Deep Sky Section in the early 1980s and, although he was not a member of the Webb Society, we had numerous dealings with him.

The other major change in the society is that after almost 50 years Don has stepped down from the layout of DSO. Callum Potter is taking this over and there may be a settling in period in terms of the format and layout as we are using new software for this. Thoughts are always welcome on how this is working out.

It is also to be noted that with the closure of Willmann-Bell (WB) and the subsequent purchasing of their assets by the American Astronomical Society (AAS), who also purchased Sky and Telescope, that we will almost certainly not be selling their books anymore as we cannot get the discounts that we used to get from Willmann-Bell. Most of the WB books can be purchased from the Shop at Sky website. There also seems to be a reduction in the number of printed books available through Cambridge University Press (CUP) in the amateur astronomy market, although I have heard of rumours of a second edition of the Messier Atlas by Stoyan et al.

Hopefully by the time you read this we will have had a successful outing at the Practical Astronomy Show (PAS) and the first spring Kelling star party for a couple of years. We have plans for an Annual Meeting at the IOA in Cambridge on the 18th June and Stewart and I are working on speakers for this. We had hoped to have celebrated the 200th anniversary of the death of William Herschel in 1822 but will have to see what speakers we can get. The Society also plans a stand at the International Astronomy Show (IAS) in Warwick in October as well as at the Autumn Kelling star party. My thanks to Steve and Anita Rayner for the support they give at these shows trucking up large amounts of materials for the stand and also for the help we get from other members at these shows.

On the society publications front we have managed to get ROP 2 back into publication. There is also a new single volume version of the Open Star Cluster Atlas by Mike Swan available with more clusters and a longer introduction. The first 100 of the Galaxy of the Month monograph is also available. On the wider front there has not been much new published. The standout there is probably Wolfgang's monolithic book on William Herschel available in both hardback and paperback through Amazon and, I believe, Books on Demand. You may have to go down the gym in order to be able to support this book whilst reading it. I hope to get a review of this out soon.

There is not much to say in the Deep Sky News really. On the software front there has been very little new out. Knightware has released new versions of their DSPME software for Android and iOS to support the DSP 8 file formats. Greg Crinklaw has announced that he intends to support the NINA scheduler from SkyTools 4 and he has also announced the end of support for ST3. There continues to be updates of CdC 4.3 Beta and also the HNSKY charting programs but these are mostly minor and increasingly focused on the imaging and telescope control side of the hobby. I was interested to note that at the recent PAS show here in the UK almost the whole show was focused on imaging and I think if one had been a visual observer there was not much to see. This is perhaps also matched by the fact that even TeleVue seem focused on night vision devices and have had no new eyepieces for a number of years. The semiconductor chip shortage also seems to have impacted astronomy with the Nexus DSC apparently having to be redesigned and a number of other products delayed.

Personally, my observing this session has been curtailed by a nasty bout of Covid but I hope this is now over and I can get the odd observing session in soon.