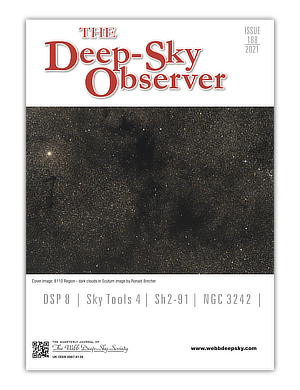 The Rise of EAA by Owen Brazell

Visual observations of doubles in Ara by Magda Streicher

Welcome to another edition of the DSO. The year continues to be a difficult one for the society, at least in the UK, with lockdowns and the weather combining to make astronomy very difficult if you don't have your own observatory. I can understand why people are tempted to do remote imaging in places with better off climates even if it makes the hobby even more expensive than it already is. These issues have made it difficult and the Society has had to cancel its physical Annual Meeting in October once again.

We also believe over the last session that we have lost two long standing members of the society in Malcolm Thompson who helped write the Webb Society Deep Sky Observers Handbook volume 6 on Anonymous Galaxies as well as contributing a lot of material on historical identities in the IC catalogue as articles in the QJ. We have also lost Peter Clark who contributed a lot of material and was a regular attendee to the Annual Meeting.

I have had a question raised with me about the Griffiths list in Martin Griffiths article on Planetary Nebulae. It was suggested that as there is still an antipathy towards the Caldwell Catalogue why would we appear to be promoting something that appeared similar. All I can say here is that we do not promote lists that are designed by people in the hope that their name may be carried into prosperity. I think that a lot of the animosity towards the Caldwell Catalogue would have been toned down if it has been merely promoted as a list rather than a catalogue. We have lots of lists out there such as the Levy List, the Bennett Catalogue, the H400 list that are regarded as acceptable, with perhaps the exception of the Levy list. Martin has promoted his list in his book on Planetary Nebulae and how to observe them. It has not, as far as I know, really caught on and of course there are more comprehensive lists of planetary nebulae to observe such as the AL Planetary Nebula Observing Club. I guess in the case of Martin's list it could be seen as a guide for more beginners to planetary nebulae observing.

On a more political point it is becoming difficult now as we seem to have two parallel astronomy communities developing in the classical one and the social media one with little or no overlap between the two. The social media community seems to have its own version of influencers who are often not that conversant with what I would call the hardcore of astronomy, or even the practical side and if they do are mostly imagers. Many of these people as well seem to focus more on OutReach astronomy and their own personal profiles rather than astronomy as members of the Webb Society would know it. We see this as we get little pull through from our own FaceBook page. Of course, this maybe the future of amateur astronomy and the rest of us are a dying breed. It would be a shame however as much of the social media side appears terribly facile.

We are hoping that the autumn events will go ahead as planned and if they do then we will have a stand at the Kelling Star Party (and did). It is not clear at the time of writing if the IAS show at the end of October will happen. If it does not then our next outing may well be the Practical Astronomy Show in March 2022.

There is also no further news on Willmann-Bell so we will not have their publications for sale. They have been taken over and we will have to discuss with the new owners what our relationship may, or may not, be. The Society itself will have a new publication in the Galaxy of the Month booklet thanks to a lot of work from Jon Gale in pulling the material together. We may also have a new version of the Open Star Cluster Atlas from Mike Swan. This will be a large single volume edition with extra clusters and a longer introduction. We have been having some production issues with the Visual Atlas of Double Stars volume 2 by Mike Ropeleswki but we hope to have these resolved and the publication back for sale.

The other news of importance is that after 50 years or more of putting together the Webb publications we are looking for someone to take over from Don Miles doing the layout of DSO.

We need to look at how we do it. The editor will stay the same and send articles in word .docx format and images, normally in JPG format, and the task will be to lay these out. Currently we use very old software PageMaker to do this but this is not a requirement and whatever layout program the person feels comfortable with will be OK.

We try and get 4 DSO's out a year depending on material but this has dropped recently. I suspect that over the next couple of years we are going to struggle to get material as the fallout from Covid-19 hits but hopefully we can get back on form. There needs to be quite a lot of interaction with the editor as the magazine layout goes ahead so we can get enough material together and also see what we need to drop or add. The idea is to try and get 28 pages of material plus the 4 pages for the inside and outside covers for each issue. We try and keep to this so we can keep under the postage levels.