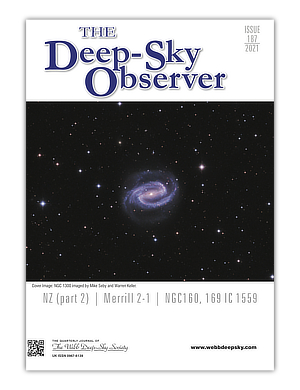 'Comprehensive Field Guide to the NGC' reviewed by Owen Brazell

Object of the Season by Wolfgang Steinicke

As you can see later in this DSO we are having to put some of the subscriptions up. This relates at this time mostly to overseas membership as both the postage costs have increased and the value of the pound has fallen thanks to Brexit.

The other thing is we are having to look at this year's AGM with respect to the pandemic and whether venues will open. As such we are going to make a decision in July as to whether we can have a physical AGM in October this year or if we are going to have an online event. In order to help our decision making here we would be interested to know how many would feel confident in having a physical meeting. Obviously at this point we don't know what the status will be but the suggestion that even those vaccinated are going to need a booster in the autumn and talks about restrictions coming into place again next winter does not fill one with confidence. If you have strong opinions either way, can you let myself or Stewart know.

On the political side it seems that the pandemic has both restricted the supply of new equipment and, due to Brexit, put the prices up (at least in the UK). It has also made it much more difficult for small suppliers to ship to the UK due to the increased paper work as I found trying to get a new cover for my telescope. As suspected the lockdowns have cancelled all the Spring Star Parties, although with the continuing poor weather we have been experiencing in the UK we probably would not have seen much anyway. This is the worst autumn/winter/spring season for observing I can remember for a long while, although these views may have been coloured by the lockdowns. It is also true I think that visual astronomers are now losing out to the imagers/EAA observers and the society will probably have to start embracing these new ways if we are to continue in the future. At this time, we are not aware of any confirmed shows for the society to go to this year as most are still waiting on government guidelines. It is interesting to note however that we have had one of our best years for new members joining, although we have lost a few as well. Society membership is now at its best level for many years.

On the book front I am not aware of any new books on observing coming out. There has not, as yet been any resolution to the Willmann-Bell situation so no sign yet of Annals 8. I am not sure what, if any, other books they had in their cycle. We are hoping that Wolfgang's new book on Herschel will be out in H1 2021 and of course when it does we will put announcements out. The same pretty much applies in the software side. There have been some small upgrades/bug fixes to both DSP8 and SkyTools 4 but nothing major. AstroPlanner 2.4. Alpha continues to chug along and there appears to be many more devotees to that program appearing on the forums, I am guessing this because of its scripting and people like playing around with this kind of stuff. If you are aware of any new interesting publications or software then please let me know and I can advertise to members.

On the hardware side I see that AstroDevices have brought out the Nexus DSC Pro digital circles which includes additional functionality. Whether this means the end of the Nexus DSC and updates for it, not that there have been any since June 2019, remains to be seen. Pegasus Instruments were also bringing out a box that will do some of the functions (and more) of the SQM meter. This was supposed to come out in 2021 Q1 but no sign yet of it.

There have been a couple of survey websites that may be new and useful to people at Legacy Surveys and wikisky.org, many of you may know of the latter but I am not sure how useful it is outside the very basic and should not really be used for serious research, use Aladin for that. There also Akarsh's site for getting DSS cutouts.

On a more rant mode the DeepSkyForum (DSF) forum which was a useful resource in the past seems to have become a resource for increasingly way-out observations. This was always an issue with certain observers but the levels of dubiousness seem to have increased as people seem to try and outdo each other with what can be seen with smaller apertures. This was always a problem with certain people on the Cloudy Nights forums but the numbers there seem to have increased as well and they are even given platforms by Sky & Telescope.