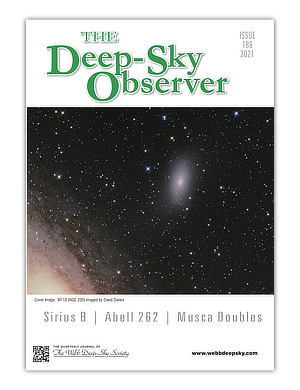 Visual observations of Sirius B by Andreas Alzner

Object of the Season: CRL 2688 (Egg Nebula) in Cygnus by Wolfgang Steinicke

Visual observations of double stars in Musca by Magda Streicher

2020 has been the strangest year with the Covid- 19 virus pretty much killing off the year. For the first time we had no AGM as Cambridge had just shut all their venues, as have practically every other venue. Unfortunately, at least in the UK, the first part of 2021 does not look much better with the whole of the UK being locked down for probably the first 3 months.

This will impact most of the spring star parties, I think, although with the terrible weather we have had in the last few months for observing here in the UK I am not sure of the impact there. It will also impact the material we have coming in for DSO as I doubt there has been much observing done in 2020. It will also impact the society’s visibility as I doubt we will be going to many meetings/star parties, at least in the first part of 2021.

I had hoped to have the first part of Andrew Robertson's NZ observing adventures in this issue but it has been a bit more difficult to layout than we anticipated so the whole article will go in DSO 187, and probably take most of it. We have also been under some pressure to get DSO 186 out. My apologies for the lack of DSOs in 2020 but this was due to technical issues at the layout end that we hope are solved. I am hoping that DSO 187 will come out pretty soon after this one. I have a certain amount of review material coming out in future issues of DSO but I could do with more observing type material.

The AGM for 2021, which we hope will go ahead in October, will feature most of the same speakers as we had for 2020. Details on this will come out as we can confirm them. I must admit I am slightly concerned by talk from the medical officers suggesting that even if we get the vaccines sorted out there are still going to need to be restrictions next winter as well.

One of the major blows to amateur astronomy came late in 2020 with the notice that Willmann-Bell will close. It is not certain how this will impact their books, although I believe discussions are on going to find someone else to take this on. This will of course impact the delivery of the Annals Vol 8 which, although it is already printed, will have distribution issues. This had some contributions from the Webb Society journals in it. It may also impact our ability to resell the books. We still have a few left and these are detailed on the Web site. As Willmann-Bell were one of the few publishers left who would take on small run and niche books this is of course going to be a blow to the world of amateur astronomy.

I would just like to make an editorial comment on Martin's article in this issue. The mention of the C(aldwell) word is not something that we normally approve of in the Webb Society. There is already a Tower of Babel out there in terms of astronomical nomenclature and adding this to it does not help. It may well be however that we are fighting a rearguard action on this topic as more and more popular software includes this and beginners don't really seem to know or understand what they are using. I am not sure either that we need any more lists of object names. The opposite argument to this is, of course, that anything that gets people out there looking at deep sky objects has to be a good thing.

There have been some interesting new Deep Sky books and software out in the last part of 2020 and in 2021 that we hope to have reviews of in coming issues. These include the software Deep Sky Planner 8 from Knightware, The Comprehensive Guide to the NGC, Ron Buta's new book on spiral galaxies, Cosmic Pinwheels, Ronald Stoyan's new guide to the Messier Objects in German, although maybe an English version will come out. Hopefully in 2021 we will see the long-awaited book on Herschel's discoveries by Wolfgang and of course we are taking bets on whether the James Webb telescope will be launched this year, currently it is set for October. There has also been further work on the AstroPlanner software with a 2.4 update in the works, although this seems to be becoming increasing niche software and is becoming more focused on the imaging fraternity, a direction that is becoming all to frequent now as amateur astronomy seems to be moving more towards technology and away from astronomy itself. I have also heard rumours that the iOS version of SkySafari 7 may be out in first quarter 2021, although I have not seen any calls for beta testers so I suspect this will slip. I am not sure what they are adding to the program.

I note that the BAA DSS are going to try and hold their 2021 meeting via Zoom. I am not sure if this will work but details can be found at on their website.