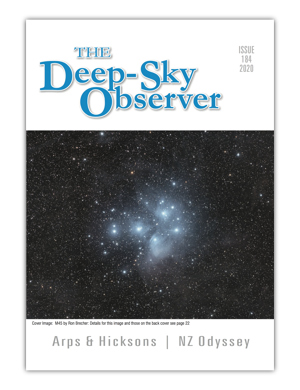 Object of the Month : M108 in Ursa Major by Wolfgang Steinicke

Book Review: 'Galaxies: The Origins and Destiny of Our Universe' reviewed by Owen Brazell

It can be a bit difficult to focus on astronomy during a global pandemic and we are seeing the results of this with many of the meetings and star parties that I would normally go to being cancelled or postponed. In theory as astronomy is usually a solitary pursuit then we should not be affected as much but with global lockdowns in place for an unknown period and unfortunately with many amateur astronomers being in the high risk categories all I can do is hope that you stay safe and we come out the other side.

The lockdowns in place in the UK also mean that you need to do observing from your backyard as the police may suggest going somewhere at night for an observing session was not an essential journey, unless of course there is a majestic comet of course. On the positive side this could be the time to sit down and write all those articles you meant to do for DSO! For those that can still observe, the lack of aircraft contrails appears to have significantly boosted the transparency of the skies.

Unfortunately we have had to postpone/cancel the Webb Society Annual Meeting this year. As there will be a back log of meetings in the autumn our only real option was to look at the end of November but the weather is usually bad then. Keep an eye on the web site for more details but it looks like we are going to have to move to June 2021. The UK government is suggesting it will be the autumn of 2020 at the earliest before any suggestion of normality returns.

I mentioned in the last editorial that there were few books now coming out for deep sky astronomers only for a number of new books to appear on the scene. The first on Galaxies by Govert Schilling is reviewed in this DSO. The second by long time Webb Society contributor Ron Buta on Cosmic Pinwheels (also galaxies one assumes although there is little data on the book) is due out in the autumn, although books are of course normally delayed. It is however available for pre-order on Amazon. I note as well that Dave Eicher also has a new book on Galaxies due out at the end of May, also available for pre-order from Amazon. I suspect that this maybe a lower level book but we shall see.

On society publication news we have reached an agreement with Kent Wallace to republish his monumental work on visual observations of planetary nebulae and hopefully this will be available through the website as well as at shows.

If there are other books that you come across on deep sky observing that I have not mentioned this is not usually due to the fact that I don't like them but that I have not seen them so please feel free to let me know what is about. It is however an interesting reflection on the way the hobby is developing that almost all new books aimed at amateurs are geared towards astroimaging. I guess that it is also true now that with the bigger publishers moving away then more books will be self-published or from smaller outfits which makes it more difficult to find what is out there. I note the trend towards more crowd funding for books.

I note that although the Willmann-Bell Annals series has now reached volume 7 the publication rate is dropping to one per year and one of the authors of the series has retired. The latest volume is still available from the society through the web site and at shows.

I also find it interesting that old out of copyright books are now being reprinted in India. I got a nice reproduction of Charles Edwards Barns 1001 Celestial Wonders from 1928 from there. I guess though one needs to be careful about copyright here.

I did hear rumours that Larry Mitchell may have some books in the pipeline on Open Clusters and on objects from the advanced TSP program, however I suspect these may be a long way out.

On the software front the long awaited SkyTools V4 has finally made it out and a review of that will be forthcoming in the DSO. One of the authors of SkySafari has also brought out a new app for iOS/iPadOS called 'Our Galaxy' which will display the 3D locations of galactic deep sky objects. This is primarily an educational tool but is nevertheless an interesting take on how close to us most of the deep sky objects we see are. As far as I can see there is no Android version of this. It is based I think on his old Windows program 'Where is M13?'

Unfortunately, as I am primarily an iOS user for phone/tablets, if you come across anything interesting in the Android world that you think members may be interested in again please let me know.