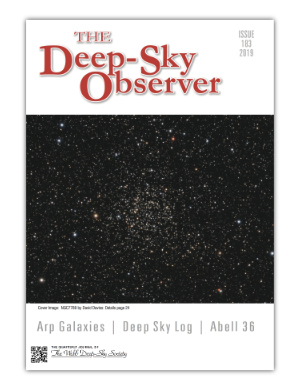 Touring the Arp Galaxies – a change of direction by Mike Wood

Object of the Season: Planetary Nebula NGC 6781 in Aquila by Wolfgang Steinicke

At the last AGM I became the 3rd president of the Webb after Ken Glyn Jones and Bob Argyle so I am not sure whether to call this piece 'from the president' or keep it as the editorial. I feel privileged to be voted in to this position as I was not one of the original Webb members (I would have been quite young at the time).

My first connection with the Webb Society was when I was working in Bude in Cornwall in a hotel kitchen during a University vacation (yes - no world travels in the vacations then you had to work) when I found a copy of the Webb Handbook volume 2 in the short lived Lutterworth Press version in a book shop in Bude. The hotel is long gone but the book shop is surprisingly still there.

I then left to work in Canada but on my return I contacted George Whiston who was listed in the book as the society secretary and he passed me on to the then secretary so I joined the Webb Soc in 1985 and later edited the DSO as we thought with the demise of the US Deep Sky magazine there might be a place for something similar rather than the QJ which had been our main publication up to then. Later they both merged and we are left with DSO and with the exception of a couple of years editing by Lee MacDonald I have been editing it ever since. Unfortunately this means I now hold three posts as President, Editor and Galaxy Section Director but if anyone wants to take either of the latter two then it would make a change.

At the last AGM we also invited George Sallit onto the council to give us the benefit of his expertise as an imager so we can perhaps contact a bit more with imagers. I have noted the rise in EAA as well as Night Vision astronomy as an adjunct to looking through a telescope and we will watch how this field develops with interest. It seems many of the people coming into imaging and other varieties are coming now through the technology route not the astronomy route, certainly in the UK. We do carry now a book on imaging and many people ask us at shows do we have an atlas for imagers as well. There is such a thing available called the Astrophotography Atlas by Charles Bracken but we do not currently have plans to carry it.

In society news we had a relatively successful Kelling Autumn star party in terms of sales although weather-wise it was not good and I spent a lot of time bailing water out of my telescope. The weather was worse however at the October Haw Wood star party in Suffolk with the gales turning a 20-inch Obsession through 90 degrees and then dumping it on its side. Luckily no damage to it occurred. The forecast had not been that good so I only took my 15-inch to that star party and it was back in its box before the gales came.

We also have a new Webb Soc calendar for 2020 and my thanks to James Whinfrey for getting the images and the people who took those for allowing us to use them and as well to Steve Rayner for getting them printed. If this works then perhaps this will be an annual thing. We also had copies of Bob Argyle’s new book, A Visual Anthology of Double Stars, just released by CUP, for sale. We will next be at the IAS show in November and hope to clear some stock there. In terms of books, Bob's tome will be the last book aimed at the amateur astronomy market published by CUP which is a shame.

There does not seem to be much in the schedule either from Springer on deep sky astronomy coming out, although much of their output is very poor quality. Willmann-Bell also seem to have dropped the publication rate of the Annals series to one a year and although Volume 7 has been announced in November 2019 is not clear that with a projected number of 25 or so that any of us will live long enough to see the end of the series. They have not yet even cleared the constellations beginning with C, I think Cygnus is yet to come. Wolfgang’s latest book, an intermediate level guide to Nebulae and Clusters, is out in a self-published edition and the society has a few for sale. We still await his magnum opus on William Herschel’s sweeps. The long awaited Volume 2 of the societies Open Star Cluster Atlas is hoped to be out by Easter next year and the likelihood is that we will release a second volume and a combined volume for new purchasers. I am not sure we are going to print anymore Volume 1 before that comes out. Some people may have noticed at recent shows we now have a water proof version of the double star charts out as well. We hope to have a new and revised edition of that out later in 2020, or maybe 2021.

In the hardware market TeleVue announced their new Apollo 11 limited edition commemorative eyepiece at the eyewatering price of $1245 which will translate to about the same in pounds I would think. There are only 300 of these being made and at that price I am not sure who they are aimed at, collectors maybe, although what the market for commemorative eyepieces is I don’t know. It will be interesting to see how many of these get used in the field.

The software field has seen very little change over the past 6 months with a new version of Carte Du Ciel out at version 4.2 about the only real change in the market, although some of the other freeware charting programs such as HNSKY also have had new releases. It is difficult though to really see what can be added to charting programs. The freeware ones now mostly include GAIA DR2 for their stellar database. There does not seem to have been much in the way of new mobile apps either and most new software that comes out now seems to be aimed at the astroimaging/control market. There was an update to DSPME which added the ability to control telescopes. There has been a demo of the new ST4 visual version shown but again no date for release so I guess at the earliest we are now looking at H1 2020. I would imagine its success at take up may well depend on how well it is able to convert exiting ST3 installations. It does appear that the venerable Megastar program maybe entering its final stages as it is now no longer able to get DSS images because of server changes and there is nobody to fix it. For a long time it has also had issues with some comet elements as well. This is a shame for those of us who used it from the beginning when it came on 50 floppy disks but all good things come to pass.

I do note that activity on the serious deep sky internet forums such as the DSF is also dropping and the majority of posts on both on the Cloudy Nights and StarGazers Lounge (SGL) deep sky forums is, in many cases, utter drivel. There are a few serious contributors on both these forums but extracting the wheat from the chaff on them is getting ever harder.

On a different society note although our finances remain in reasonable shape they have been declining year on year and as such we have been unable to get in overseas speakers at the AGM as often as we would like. I note now that an increasing number of societies are asking people to think of them in bequests and although this is not something we really like to do as a charity it would be useful to us to increase the reserves as we would then be able to look at expanding our speakers at AGM’s and also look at the publication range.

In terms of shows we will be at the IAS in Warwick in November so before DSO 183 comes out and our plans for next year remain fluid. We hope to be at the Spring and Autumn Kelling star parties as well as our own AGM. We may be at the BAA DSS meeting in Sheffield in March although that will depend on the facilities (primarily parking) as it seems the venue is in the centre of Sheffield and I am not sure there is parking to take a stand. We also hope to be at the PAS in Kettering, also in March, as we had a very successful time there in 2019 so we hope to see some of you there. Unfortunately that show also is at the same time as the dark of moon weekend in March so will yet again conflict with some of the Spring star parties.

As always I would like to request more contributions for DSO as we are running very much hand to mouth at the moment.