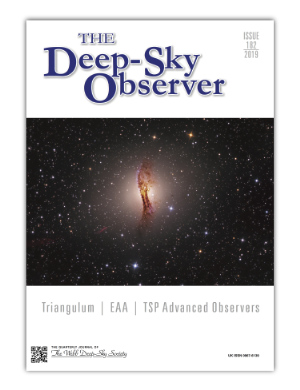 Touring the Triangle by Patrick Maloney

Object of the Season : NGC7635 in Cassiopeia by Wolfgang Steinicke

Welcome to this issue of DSO. Hopefully this will be out before the AGM in June but it really does empty the bank of articles. Now with the longer nights it is perhaps time to start putting down on paper your winter observing experiences, if you managed to get any.

I understand that the last editorial caused some controversy with the organisers of the Practical Astronomy (PA) show. I guess there is always going to be a conflict between observers and show organisers over dates and it is unfortunate that next years PA show dates also clashes with the dark of moon weekend in March.

The excuse I tend to get is that the show is in the day time and anyway almost 80% of new purchasers only want to get into imaging. A trend exacerbated by people trying to use their phones for imaging so they can post a poor image on their Facebook feeds.

I feel that it is in some cases valuable to be able to stir up controversy and as always the editorial reflects my views and we do offer the right of reply if people feel strongly about what is said in the editorial. We used to have a letters page but of course people do not use letters anymore.

I have noticed that the trend towards Electronically Assisted Astronomy (EAA) seems to be accelerating and we have an article by William Scutcher in this edition on his views on this technology. Interestingly William was moved to write this article because of Mike Woods piece in a previous DSO where he felt that EAA was not for him. Mike has since reversed his views on this and spends almost all his time observing with his C9.25 and a camera.

His latest set of images include the jet in M87. I guess with all the news about the Event Horizon Telescope (EHT) image of the black hole in M87 many people will want to see it (M87) and there will be more interesting claims of seeing the jet. Mike's images are reproduced in this DSO so you can see what can be done with relatively small equipment.

The latest results from the UK light pollution survey shows that light pollution is increasing everywhere and people’s views on what is a dark sky are also changing. I guess the original hope was that with LED lights costing less we might see a reduction but instead people think that as they are cheaper they can put more lights in. It is unfortunate that we have still be unable to break the link between people’s fear of crime and darkness.

I note that Wales claims it has one of the largest areas of protected dark sky in the world which is probably true if you look straight up and ignore the large light domes around the horizon. My experiences in one of their dark sky parks was not that promising, although being mostly accompanied by imagers who did not really know what dark skies were probably did not help. Of course Welsh weather probably does not help either as it is notorious for the amount of precipitation it gets.

Many people will have noticed that the parent company of Sky & Telescope (S&T) has filed for chapter 11 bankruptcy in the US. I assume this means that Sky & Telescope will be sold to another publisher. Unfortunately I feel that both the magazine, and the website, observing articles in particular, are becoming more banal and starting to appeal to the lowest common denominator. The observing articles in the magazine are also becoming more extreme, particularly those from the US NW coast and I wonder whether any editing is done to look at what may be possible to see without drugs.

As expected on the forums the various pro and anti groups are at each other's throats and just repeat the same twaddle, which basically boils down to S&T is the greatest thing ever apart from the bible and must never change or it is time for it to go. If they are sold then I hope that a clear out of the top editorial team may bring it back to some kind of usefulness.