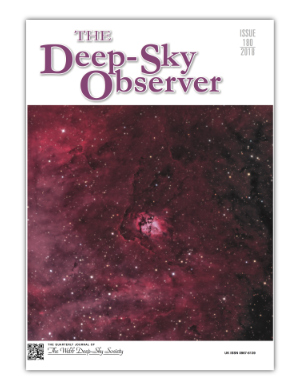 Grus and the Grus Galaxy Chain by Andrew Robertson

Object of the Season: M1 in Taurus by Wolfgang Steinicke

I apologise yet again for the late arrival of this edition of DSO. Most of this is due to us struggling for material, but also Don has other work during the summer so he does not have the time to spend on the layout.

The Webb Society will be undergoing some upheavals in 2019. Bob is standing down as President after a long stint and I am standing down as editor of DSO. I have been doing this for nigh on 30 years and I think it is time for new blood to take over for a number of reasons.

The world of deep sky astronomy is changing and if the Webb Society is to last another 50 years then it needs to evolve too. I know that some of our members think that the Webb Society should be concentrating purely on visual deep sky but we are not getting enough material from the reducing number of practitioners of that art.

The Webb Society when it was formed went in new directions and tried new things, witness Ed Barker's work with a prism and planetary nebulae for example, and the new directions in deep sky astronomy seem to be in EAA and NV aided work as people start to look at objects that once were the preserve of imagers. I do not feel I am sufficiently au-fait with that part of astronomy and we need to start including people in those fields if we are to stay alive.

It would appear that those people who are still doing visual observing now publish their observations on forums and, heaven forbid, Facebook so they can reach the maximum number of people to impress with their skill. They may also be doing it now in private groups.

There are also a number of projects I would like to do myself that the stress of trying to get DSO out normally precludes. I also feel that now the observations I see being made with small telescopes are things I struggle to see with my larger ones either due to aging eyesight or due to increasingly poor skies.

I hope that somebody will stand up and take this job on or the Webb may not last through 2019. We can always blame its fall on Brexit as everything else is.

I hope to get DSO181 out by the end of the year but for that to happen I will need more material. If we don't get this then we have a two options as I see it:-

On other matters we have switched our group from Yahoo to groups.io. I hope that this will reduce the number of issues we have been having. I was surprised, and disappointed, when we asked at the AGM how many people were on the group. Even most of the committee aren't. This perhaps reflects on the lack of activity there.

On the hardware side TeleVue have teamed up with Astronomik in Germany to produce a line of nebula filters. The Bandmate 2 Nebustar is a UHC type filter but with no red leak and comes in 1.25 and 2-inch sizes. They also have a line of OIII and H-Beta filters but these are substantially the same as the Astronomik versions. I have a Nebustar filter and hopefully we will get a review of that in DSO.

There has not been much or any new material out in the high-end eyepiece market but an increasing number of Chinese clones of the TV Ethos. Many of which are so blatant that they even have the same shapes.

There also has been no movement on the software side I assume that SkySafari 6 for Android will be out (supposedly end of August) by the time this reaches your hands.

On the book side I suspect that by the time this DSO comes out so will the Interstellarum Deep Sky Field Guide from CUP. It comes in both field (waterproof) and desk editions. I did have a hand in this with checking the English and other facets.

There is also a new edition of the popular book 'Turn Left at Orion', also from CUP, and also Bob's book on double stars, I guess sometime in 2019.

Otherwise there has been a dearth of books on Deep Sky themes. There as an interesting book on an Introduction to Planetary Nebula by Jason Nishiyama published by IOP. The book is, however, very short and quite expensive. It does have some interesting ideas, although the author seems not to like the binary hypothesis too much.

There have been some queries regarding the editorial in DSO 180 and whether the Webb Society is still focusing on visual observing or moving more towards electronic.

The focus of the Webb Society in the past has been primarily towards visual observing and this is still at the core of what we do. However as the world moves more towards electronic imaging, and with some of the opportunities opened up by this (see some of the articles in the forthcoming DSO 181), we felt that we had to encompass this side as well.

We do not have any plans to move away from visual observing as we seem to be one of the last groups in the world to produce a magazine that has this at its core however we also need to look at a broad church.