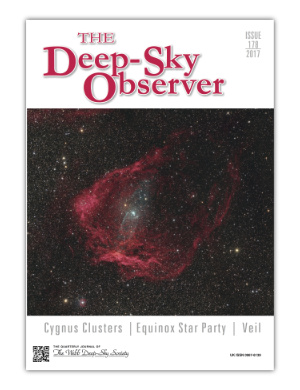 More Fun with a 5-inch by Mike Woods

Object of the Season: The Veil Nebula by Wolfgang Steinicke

Review: "William Herschel and the Universe" by Jonathan Gale

Well we are half way into the observing season and the skies have not co-operated as well as they might. I have had a couple of runs with the 22” and one with the 15” just to check it is still working but the skies were hazy.

As a society we have had a couple of reasonable successful outings. We did well with a stand at the Kelling Autumn Equinox star party thanks to Steve, Anita and Jon and Steve’s dog Pepper, who attracted more people to the stand than us. We got a couple of new members from that one.

The IAS stand was not so successful this year with turnouts for the show very low on the Friday and not a lot better on the Saturday. My thanks again to Steve, Anita, Jon and James for helping out at that one. We did not get any new members from this show which was disappointing after last year.

The society hopes to have a stand at the BAA DSS meeting in Bedford on the 4th March 2018 and of course at our own annual meeting on 2nd June 2018. Whether we go back to IAS will be questionable. It is a difficult balance between visibility and cost along with effort.

On the society publication side hopefully sometime next year we should have volume 2 of the Open Cluster Atlas out as well as possibly some new publications. This will depend on what effort we can put into this. We hope to have Magda Streicher’s book, Astronomy Delights, out as well describing her observing experiences before Christmas.

We are always looking for new ideas in this area. I hope as well that you are all making use of the society Web page as Bob and I, along with James, put a lot of work into making this interesting. The web server will soon get updated to use the latest security protocols soon as most modern browsers will start to baulk at older sites in 2018.

The web site will also have news on speakers for the 2018 Annual meeting, although we have tentative line-up of Professor Janet Drew, Yann Pothier, Omar Nassim, Sara Wager and Mark Stuart. Talk details to come later.

On the book front the autumn has been pretty good.

There have been two books out from Cambridge University Press (CUP) of interest, The Cambridge Photographic Atlas of Galaxies and Unveiling Galaxies. Both of these are excellent publications and for anyone interested in galaxies, the first I think is a must have. We may have a review of that in a future DSO.

Annals of the Deep Sky Volume 5 is also out now and we should have copies to sell shortly through the society. It appears that Willmann-Bell are looking at about a 9 month publication cycle for these so some years may see two volumes and others maybe just one. My concern with this is it looks like at least 15 years to get the whole series out, something I am not sure I will see. Having said this the individual volumes are still worth getting even if the series is never completed.

Willmann-Bell (WB) have also indicated that there will be a new Night Sky Observers Guide volume 4 : Glories of the Milky Way to -54 Degrees out. I think this will be out in Q1 next year and when it comes out we will get some copies to sell in the UK. However given WB’s publication schedule it may be nearer H1 2018 than Q1.

Mike Inglis and Springer have brought out a second edition of his Astronomy of the Milky Way : The Observers Guide to the Northern Sky. This is actually not half bad and much better than recent Springer deep sky publications. It is aimed at more intermediate level observers.

In the software field I expect to see SkySafari 6 for iOS out before Christmas, not sure what will be in that but the Pro edition is getting pretty good. Normally with SkySafari the other OS versions follow somewhat later.

If you like plotting lots of galaxies then the freeware program Carte du Ciel version 4 is now out and plots 5 million galaxies from the PGC/LEDA catalogues. This should be enough even for the EAA and CCD observers, at least for the moment 😊

There appears to be some movement on the almost mythical SkyTools 4 but I still think this will be an H1 2018 delivery as almost all the testing is still on the CCD and imaging side. SkyTools does have a new forum site setup which you can register for at www.skyhound.com/forums which appears to be where the SkyTools 4 information will be going.

Deep Sky Planner has brought out a couple of minor updates to 7.2.1 and added some interesting new plans to their repository. The next release of the Nexus DSC software may have some interesting new catalogues that Serge and I have been working on and there are also some rumours about some new catalogues coming for the Argo Navis system. I am not sure when these are likely to be released into the wild though.