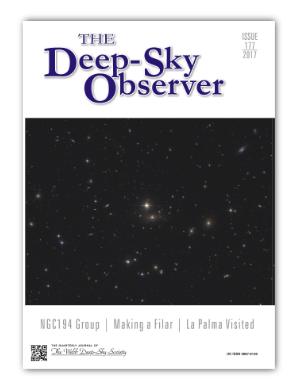 NGC 194 Group of Galaxies in Pisces by Ronald J Morales

Object of the Season: NGC 2537 peculiar galaxy in Lynx by Wolfgang Steinicke

The nights have finally turned and we are getting astronomical dark here in the UK, along with a lot of rain in the western half of the country, fairly typical with the summer and cricket season in full swing.

It would seem that a lot of people are abandoning these shores for the total solar eclipse in the USA in August so I would imagine that a lot of meetings of astronomical societies at the beginning of the next season will be holiday snaps.

Speaking of meetings the 2017 Annual Meeting went well and we had a great array of speakers. We did not quite reach the 100 mark for attendees which was disappointing but those that did make it appeared to enjoy themselves. The date for next year's meeting is currently set for the 2nd June 2018, again at the IOA and Stewart and I are starting to look at speakers for that event.

I know that there are issues regarding the location and a number of people feel that it is too far and too biased towards the East of the country but finding locations to hold meetings is always difficult, as the BAA DSS finds as it takes its meetings around the country.

In society news Steve, Anita and I took a Webb stand to the North West Astronomy Forum near Liverpool. There was a very disappointing turnout at the meeting given that people from the north always complain that the main astronomy meetings are in the south of the country but then they don't seem to support them when they are in the north either. It is not an event that we shall return to.

We are going to have stands at both the Autumn Kelling Equinox star party and the International Astronomy Show (IAS) show a couple of weeks later so hopefully we may see some members there as well as raising money for the Society.

We still have some Willman-Bell publications to sell as well as the first part of the new Atlas of Open Star Clusters by Mike Swan, along with the usual collection of publications, stickers etc. Hopefully the second part of the Clusters Atlas will be out in the next 12 months.

On the publications side there are a couple of new books due out from Cambridge University Press that may be of interest that may be published this year. The first is The Cambridge Photographic Atlas of Galaxies due September but currently on a one month away from whatever date it is. The second is called Unveiling Galaxies: The Role of Images in Astronomical Discovery, again due in the autumn (maybe).

Unfortunately the Richard Wild's book on Bright and Dark Nebulae from Springer appears to have bitten the dust and an attempt to use Kickstarter to publish it also failed. There are rumours it may come out in a smaller form from another publisher but we shall see.

Kent Wallace has published his magnum opus on Visual Observations of Planetary Nebulae and this is available via the US version of eBay. There were only a limited number published so it may no longer be available.

Springer maybe getting closer to publishing its book on William Herschel (currently slated for September but over a year late now). Springer also have the second edition of Astronomy of the Milky Way by Mike Inglis out. I have not seen a copy, but the first edition was poor to say the least so I do not hold out much hope for the second edition.

It is not currently clear when the 5th and 6th volumes of the from Willmann-Bell will be published but I assume sometime this year. (Update: Volume 5 was at the printers on the 20 Sep 2017 according to the authors.)

In the equipment side a link that maybe of interest is Don Pensack's guide to nebula filters. This is an interesting look at all the visual observing filters on the market. It does not cover filters primarily designed for imaging.

Phyllis Lang tells me that the new version of SQM Reader Pro 3.2 is out which automates the collection of SQM data if you have an SQM meter that connects via ethernet or USB to a computer. She also has a new piece of software for measuring and converting SQM readings. More information at Knightware.

Harold Corwin has released an updated set of NGC and IC notes. He also informs me that the defunct NGC/IC Project website is now back up in a limited form. This is now being managed by members of The Astronomy Connection and will hopefully be updated to include the latest NGC/IC data.

A new version of Stellarium (0.16) has been released. This is a piece of software I use for wide field views but find it hard to configure to show DSOs. It is however free.

Jean-François Courtot, author of Making a Simple Filar Micrometer, has pointed out some typographical errors in the article.

We apologise for these errors and hope that they have not caused too much confusion.