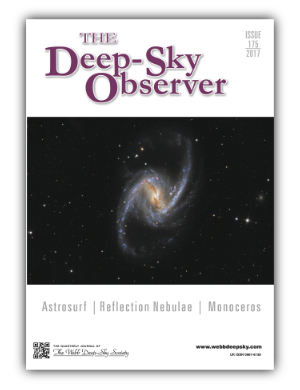 Adventures in Camelopardalis by Al Lamperti and Frank Colosimo

Object of the Season: NGC 1333 by Wolfgang Steinicke

This year marks the 50th anniversary of the formation of the society in 1967 and I wonder how many of the original founders could have seen it still going strong after all that time. To celebrate this occasion we have a fantastic speaker line up at the annual meeting in June and details for that can be found on the web page. We hope to see many of you there.

We also hope to go around to a few more local events through the UK and try and raise the societies profile there. Thanks to Phyllis Knight we may also have a presence at NEAF in the US.

As always DSO could do with a few more articles. I know that, particularly in the UK, it has been a poor winter season and I have not had the 22-inch out since October. The few limited opportunities I have had have seen either the 15 or the Mewlon go out. I do envy those people who can observe from their backyards as that seems to be the only real opportunity one has to actually get any observing in.

I must admit that after all the time spent doing DSO I wonder if it is time for a change in direction and editorship to take us forward into the next 50 years as one can get rather stale in terms of ideas. If anyone has an interest in taking it on please let the committee know.

Unfortunately our plans to sell Willmann-Bell books had the unexpected side effect of causing one of the main dealers in the UK to pick them up and sell the at prices we would struggle to sell at so once we have sold our current stock I am not sure if we will continue the experiment. It is also heavily impacted by the costs of getting the books here and the fall in the value of the pound against the dollar.

I did notice at the main astronomy show, AstroFest, here in the UK in February that the foot fall in the exhibition seemed to be well down from the last time I went and the number of dealers having stands also had gone down a lot. The talks seemed well attended so perhaps that is what the show is mostly now, rather than a sales event it is basically a conference.

Interestingly despite this there seems to a proliferation of star parties here in the UK, mostly very small events of 20-50 people. I was also interested yet again to note the increase in large aperture telescopes attending these events but with no real idea what people are looking at, apart from the obvious lollipops. Most of these events seem to be driven by astronomy forums. I must admit I have some issues with these, especially the deep sky sections as we are seeing, what to my mind are, increasing ludicrous claims of object visibility. I think many of these come from lack of experience and just because someone sees something at 2000m in a mountain climate does not mean it can be seen from 10m in hazy skies.

In resource terms it seems that there is some movement to get a new update to AstroPlanner out and there have been a number of updates to that recently, many of which seem to be driven by one person doing odd things. It has to be very challenging in this environment for software developers in a small market segment such as this not to try and go down some very odd paths. I do wonder if this is what is delaying SkyTools 4 as it now cannot even confirm to come out in 2017. I wonder if the plan to hit home runs and support every branch of astronomy that is burgeoning in the amateur space such as spectroscopy, EAA as well as imaging is going to be a challenge that is not possible to be met in one program. It seems true in astronomy, as in every walk of life, that a small vocal minority can have an influence well above its worth.

For interest there is a new charting resource now available. The Pan STARRS survey has publicly released its imaging data. Note this is not as flexible as the SDSS or DSS imaging surveys as you get a whole cutout and the object you are interested in may be in the corner of the data. It does however have more sky coverage than the SDSS, although the image quality is much poorer. For those interested in the Herschel 400 project there is a special page for that with images of all the H400 objects.

I must apologise for issues with the last DSO. The Abell 85 was incorrectly attributed to Andrew Robertson when it should have been Andrew Luck. Also the article on La Palma missed all the drawings that should have accompanied the article. These drawings are reproduced on page 13 in this issue. I apologise to both Andrew and Andrew for these errors.