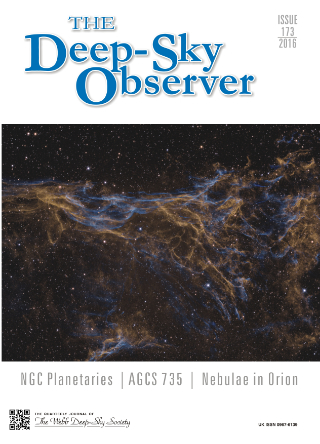 Emission and Reflective Nebulae in Orion by Patrick Maloney

My Double Life by Michael Woods

Object of the Season: B86/NGC 6520 by Wolfgang Steinicke

Next Object of the Season: NGC1333 by Wolfgang Steinicke

Well the Autumn star party season is now here and I had a reasonable, although not great, Kelling Star Party. We had clear slots but spent a lot of time hunting holes in the cloud. This was one of those occasions when if a weather forecaster had been present they would have been lynched as the forecasts would change on an hourly basis, usually for the worse. This makes it very difficult to plan observing lists as you don't know when or if it will clear. We are also starting to see the impacts of the Brexit vote on the prices of astronomical equipment as prices rise by at least 10%. It does not seem to have made much difference in the movement of second hand equipment as that is still struggling to move. I guess people still have disposable income and are buying new. We are still looking for new material for DSO although I am in slightly better shape that I was a few months ago thanks to some major contributions coming in.

On the society front we now have car window stickers and bumper stickers as well as mugs for sale with the new brotherhood of faint fuzzies design. These will be for sale at IAS and from Steve Rayner. Hopefully prices will go on the website but the stickers will currently retail for £2 each and the mugs for £5. The programme for the 2017 50th anniversary meeting is now being finalized and the list of speakers can be seen on the website (see also page 12) and we are delighted to have Steve Gottlieb as the main speaker. Steve is well known from his Sky & Telescope articles as well as his NGC/IC contributions. He was also a major contributor to the Webb QJ in the old days. Wolfgang will also be talking on William Herschel and the dark nebulae and we have Bernhard Hubl from Austria talking on imaging the southern skies. The society is also reselling some Willmann-Bell books. These will be for sale at the IAS and other meetings or again through Steve. Prices on request.

Unfortunately, we did not seem to get much traction from our adverts in Amateur Astronomy magazine in the US so we will not be trying that again. James has been updating the Facebook page but although we seem to get a lot of visits/likes none of these seem to turn into either visits to the website or new members. It seems that Facebook is its own world with very little interaction with the wide world outside. It is difficult to know then how much effort to put into this if it does not translate into members. The world of social media seems to have its own rules, most of which are impenetrable to anyone over the age of 30!

We also have a new printed guide to the Abell Galaxy Clusters from the Alvin Huey series.

Victor van Wulfen has released the 2.2 edition of his clear sky observing guides (www.clearskies.eu) and if you are into star clusters there is a wide selection of guides to obscure cluster lists. He has also added an Abell PN guide as well as a number of others to the selection available for download. This is an immense project that has taken a lot of time and is worth looking at. Some of the files though are very large, in the multiple gigabyte range. I note that the Galaxy Log YouTube channel does not seem to have been updated since June. It will be a shame if this has gone but I guess it has been a lot of work and other factors come into play in life. Steve Gottleib has updated his mammoth NGC and IC observing notes files on Adventures In Deep Space as well as some other observing adventures.

On the software side there has been an announcement that SkyTools 4 should be released in about six months so probably Q1 2017. See the Skyhound website for details. A lot of it seems to be concentrated on functionality for imagers but I guess that is a reflection on the direction of the hobby. Still no sign of any of the new astronomy books hoped for this autumn as they seem to be continually delayed, many into next year. I had hoped for the review of DSP 7 in this edition but it will now be in DSO 174. Software is always a challenge to review properly.

For those in the UK a date for your diary is the BAA Deep Sky Section meeting on March 4th 2017 in Newbury. Details are on their website. The society hopes to have a stand there.