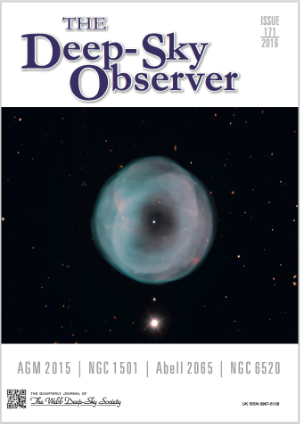 Society Accounts for Year to 2015 March 31 by Steve Rayner

Object of the Season: NGC 1501 in Cam by Wolfgang Steinicke

Next Object of the Season: B86/NGC 6520 by Wolfgang Steinicke

I apologise for the delays in getting this issue of DSO out. There were delays getting the AGM report and the bank of articles is looking rather thin again. I know the weather in the UK has been rather poor this season (again) and a number of our regular contributors appear to be writing for the BAA but if you have any articles then I would like to receive them. The magazine is really yours so without your regular input I cannot write all of it, despite now being laid off from the oil industry after 20 odd years with Schlumberger. Whether this will give me more time to do observing myself will depend on whether I can get back into the rat race.

I did manage a decent dark sky trip with the 22-inch down to Devon with Jon Gale and Ian Genner where we finally got a run of decent nights. As always dewing was a problem and after about 6 hours the primary dewed up.

Hopefully this issue will be out before the AGM in June and I look forward to seeing many of you there. As has been mentioned before 2017 is the 50th anniversary of the society and we have been looking for ways to celebrate this. Jon Gale has come up with some ideas for clothing and also a bumper sticker and possibly a mug. If you have any other ideas, then please contact a member of the committee.

On the book front there has been a number of new releases or forthcoming books.

These include the release of the Annals of the Deep Sky volume 3 from Willmann- Bell, mostly excellent apart from the section on Exoplanets. I have no idea why everybody feels the need to write about them when there is really nothing new to say. There is a suggestion that Volume 4 maybe out before the end of the year.

One thing of interest is that the society will be selling some of the Willmann-Bell books at the AGM and IAS so now is your chance to pick up the volumes you have missed.

The release of Edition 2 of Steven O'Meara's Caldwell Objects appears to have slipped until September, no surprise here as O'Meara's books always seem to slip.

A surprise new book from Martin Griffiths on Observing Nebulae is due from Springer in June. Hopefully this will be better than his Planetary Nebula book. Given this is in the Patrick Moore series and the production quality there is usually low I am not holding my breath on that one. Initial information suggests it may be aimed mostly at CCD imagers.

Springer also released the 2nd edition of Steve Coe's Deep Sky Observing book. Personally I thought that it was disappointing and suggests how out of touch Steve Coe has become with modern tools. We hope to have a review of it in DSO 172.

Another interesting new book is the Atlas NGC Photographique. This too I hope to have a review in either DSO 172 or DSO 173 and it is something that the society have looked at selling in the UK.

On the software side there is not much new to report. There is a new release of Phyllis Knight’s Deep Sky Planner (v7) with a number of new features and I hope to publish a review of this in the next DSO and I have been working on beta testing that.

There have been small updates to Starry Night Pro/Pro Plus v7 and some interesting updates to the free planetarium software Stellarium taking it to 0.14.3.

Hans Klein appears to be back at work on the freeware charting program Hello Northern Sky taking it to 3.2.2 which now will show Axel Meiningers Milky Way panorama at large scales as well as some updated data bases.

It appears that the support for Microsoft’s Worldwide Telescope project has been taken over by the American Astronomical Society so it will be interesting to see what happens there. On the App side the new release of Sky Safari 5 Pro now includes some of the Abell galaxy clusters and Hickson groups as well as a new interface. The lower cost versions SSP 5 Plus and Basic are also out now. Android versions for these will be out later in the year after the Mac version. For the price it is very good.

A new program for looking at NGC/IC objects has come out called NGC Miner. This is only for the iPad.