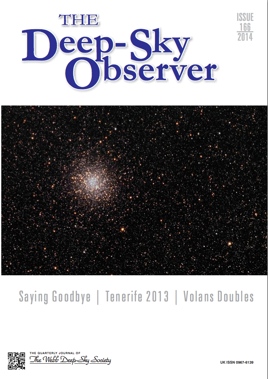 Object of the Season: NGC 40 planetary nebula in Cepheus by Wolfgang Steinicke

First I must apologise to Peter Morris and Jeremy Perez because we managed to miss all the illustrations that went with his article on Double Stars of Summer from the last DSO. They are reproduced in this issue. Note that as these are colour images they will be best seen in the PDF version of the magazine. I also apologise for the lateness of this issue but I have been on the road with work and that has not helped over the last few months. Articles that I receive will be published but if you don't see your article in the next issue this is often because of layout issues not because the article is not good or we just don't like the piece. If there are issues with an article I will discuss with the author rather than just not publishing.

I did have one week when we attempted to observe from a dark site in North Devon but we were there for seven days and it rained for seven days. I think I managed a total of three hours observing. Now it is full Moon of course the skies are clear.

Once again in correspondence it has been raised that we only seem to publish observations by owners of large telescopes. Neither I nor the Society has anything against observations with smaller telescopes but we just never seem to get any articles to publish by owners of small telescopes. The double star articles tend to be aimed in that direction but nothing on other deep sky objects. Whilst on the subject of double stars I received a note about a new book on the subject published by Martin Nicholson. As it was not too expensive I bought it from Amazon. It turned out to be a very thin publication briefly listing his data mining techniques and then a list of double stars found by this method organised by constellation. The book claims to give double star observers a new list of objects to look at rather than the tired old stars they normally do. The reality is I don't believe this is a book worth getting and it is better looking at the well known objects unless you are really bored.

John Vickers has let me know he now has a new series of images that can be downloaded from his website. The BRO (Back River Observatory) database can be downloaded from the dropbox link on his site. Totalling 1.5GB of images taken in IRB, red and blue these are interesting false colour images of deep sky objects along with identification charts. Carefully read the instructions before downloading though as you may be able to get it all in one hit; otherwise you will need to download the RA sections individually.

In other news it looks like CUP will be publishing the Interstellarum Atlas that was originally published by Oculum. The costs though are likely to be prohibitive as I see the premium edition that sold in its German version for about £80 will be £145 from CUP. For those interested in very faint fuzzy objects then Alvin Huey has made one of his downloadable observing guides on the Palomar Compact Galaxies available. This can be obtained along with all his other Guides from www.faintfuzzies.com. Note that the Society is selling some of these as printed editions as well as his commercial Guides. Details can be had from Don or Steve Rayner. Currently I don't see much new in the world of DSO books coming out. Even Springer don't seem to have anything due.

The software world also appears to be a bit in the doldrums. Both AstroPlanner and Eye & Telescope appear to be stopped being developed and there is no date for SkyTools 4 but it would appear to be unlikely to be before 2016. Versions of The Sky have appeared for both iPhone and iPad (different versions for both unlike SkySafari).

For those interested in digital setting circles there appears to be a new entrant on the market. The Nexus DSC appears to be somewhere intermediate in price between the Argo Navis and the Sky Commander. Hopefully there will be a review of this in a future edition of DSO.