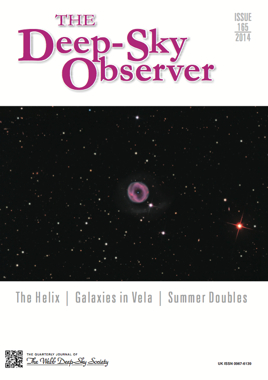 Observing Some Galaxies in Vela by Ronald J Morales.

Object of the Season: Globular Cluster NGC 5466 in Bootes by Wolfgang Steinicke.

Recently we had a resignation letter that cast a number of aspersions on the society and in particular on its policy towards being up-to-date in terms of observing. The suggestion was that the society basically was only interested in a boys toys competition with my Dobsonian is bigger than yours. This I believe was triggered by comments about the Caldwell list and the BAA DSS in the last editorial. It is probably time then to again talk about what we will and won’t publish. There are many magazines out there that cater for CCD observers with detailed articles on how to process your images. That is not something I am interested in. I am however interested in articles that use CCD images to tell a story or describe a project. Unfortunately very few articles of this type are written which is a shame. The focus seems to be on how to process images not what the images are of. If members would like to write an article about projects that they are doing with their CCD equipment then I would be delighted to publish them and now we have the PDF version of the magazine where we can publish full colour then we can show these images to their best. The imaging world is also getting very impressive in terms of equipment and image quality.

The 2014 AGM was well attended but it was disappointing to note that nobody came forward to act as the society webmaster. This is the reason that the website has had minimal updates for some time. We do now have a new webmaster in James Whinfrey and hopefully we can get the website moving again. I hope that you will support him as you supported Tim and we can continue to have the dynamic website that we had before. It is worth noting that the society now has some new publications for sale. Alvin Huey has kindly allowed us to print some of his fine observing guides so you can now get The Arp Guide, The Hickson Guide and the Abell Planetary Nebula Guide via the society. We have also printed the Deep Sky Forum Object of the Week for 2012 and 2013. If you are interested in copies please contact Steve Rayner or see us at a star party or astronomy show.

guides covering the Herschel 400, Herschel 400 II and Herschel 400 III. Hopefully we will also soon have the second edition of the introduction to Visual Observing out. This has taken longer than hoped to get out because of issues with illustrations.

We are now getting back into the observing season although I did spend some of the summer in the high arctic looking for Polar bears I have had the 15-inch out a few times but an accident with the garage door has trapped the larger telescope inside. Hopefully it will be rescued in time for the star party season to get underway. I must admit though to spending a lot of that time looking for moving fuzzy objects.

In terms of new technology it has been an interesting summer with a number of new books on deep sky coming out. Hopefully we will have a review of some of them in a forthcoming edition of DSO. These include The Messier Objects 2nd Edition by Stephen O’Meara (CUP) , The Concise Catalog Of Deep Sky Objects by Warren Findlay (Springer), Choosing and using Astronomical Filters by Martin Griffith (Springer) (Mostly CCD imaging). Forthcoming presumably by Oculum will be an English edition of the Interstellarum Atlas in both Premium and Standard edition. I have the German Premium edition and it is very good. Rumours suggest an October timeframe. In equipment terms not a lot seems to have happened. The promised review of the Explore Scientific 9mm 120 has been put off until DSO 166.

We do have a few articles in the bank for DSO 166 but it would be nice to have a few more so I can start thinking about the balance for that and DSO 167.

Those interested in the mechanics of deep sky observing might want to look at Andrew Crumey’s paper on human vision. I believe it was considered somewhat controversial by the referees and I do query some of his data on what William Herschel could and could not see, especially in regard to Wolfgang’s presentation at the 2013 AGM.