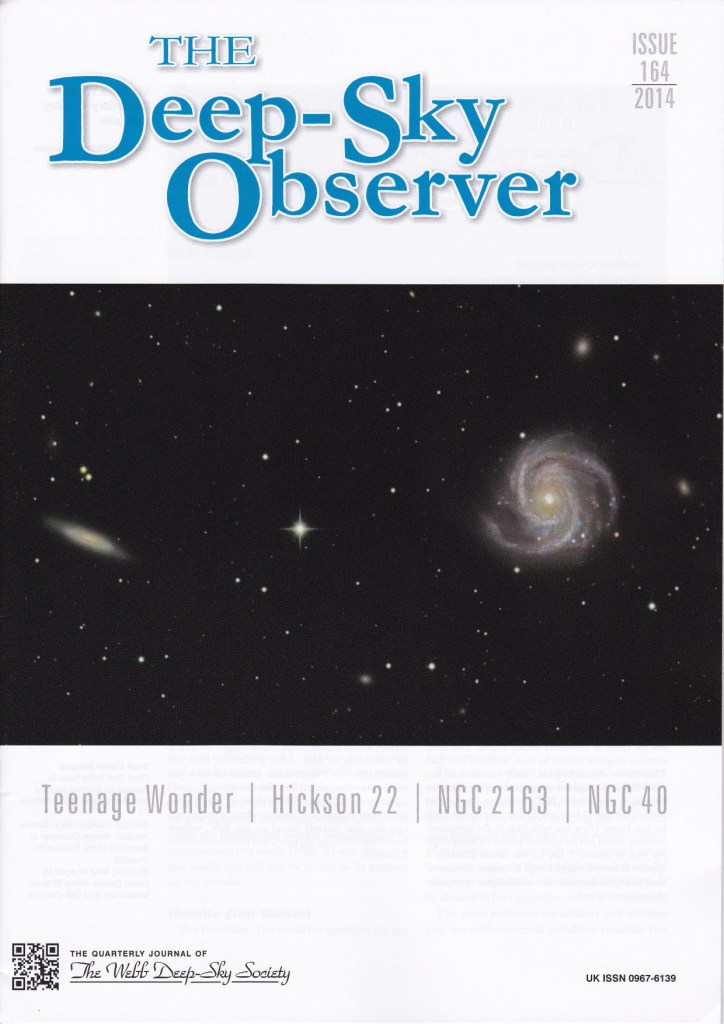 Webb Society Accounts for the Year to 31st March 2013 by Steve Rayner.

Next Object of the Season: Planetary Nebula NGC 40 by Wolfgang Steinicke.

Object of the Season: Bipolar Nebula NGC 2163 in Orion by Wolfgang Steinicke.

As suspected as I write this the spring star party season has mostly been a washout however there have been some clear nights for observing. As always, the existence of a home observatory seems to make the most difference in whether you can get out to observe or not. There have been serious dew problems this year as well and I have finally had to add secondary dew heaters to both my Dobsonians. I was disappointed to note however that the other deep sky organization in the UK, the BAA Deep Sky section appears to be going down a more populist route and instituting a Caldwell program. A shame but this would appear to be instigated by a rash of imagers with no idea about astronomy joining. I hope this is not the end of this group as a serious deep sky organization.

I have noted that a number of new deep sky books have come out that maybe of interest to members and fuller reviews of some of these should feature in a later issue. These are Stephen O'Meara's Messier Objects (2nd Edition) and Observing by Hand, a study of how the nebulae were drawn in the 19th Century. The O'Meara one I feel is a major disappointment and is not up to the usual CUP standards. There are also two forthcoming books on the deep sky and the history of deep sky observing due out mid-year. These are the second edition of Walter Findlay's Concise Catalog of Deep Sky Objects and William Parsons, 3rd Earl of Rosse: Astronomy and the Castle in Nineteenth-century Ireland. The latter contains chapters written by both Wolfgang and Alan Chapman so should be good. Sadly I understand that Kent Wallace's magnum opus on observing planetary nebulae is struggling to find a publisher. He may yet self-publish but if I have any further information I will let you know. There has been little in the astronomy software world but an updated release of Starry Night Pro Plus to version 7 has hit the streets although it appears to be very buggy. I hope to include a review of the EXPLORE Scientific 9mm 120 degree eyepiece in the next issue as well.

This issue should reach you before the AGM and I hope to see many of you there. The Society will also have a stand at the IAS show in the UK and we should have a number of new items for sale including the 2nd Edition of a Guide to Visual Observing and versions of Alvin Huey's books/Guides on the Abell Planetaries, Hickson Groups and Arp Objects as well as the Deep Sky object of the week guides from the Deep Sky Forum.

On other society news we have not had any response to the request for a webmaster to replace Tim who is stepping down at the AGM. This is an important function for the society and with the addition of the PDF version of the magazine and new membership as detailed in DSO 163 it will become more so. Without one it is not clear how the society can function in the Internet age. If you are coming to the AGM please give this some thought to whether you could perform this role for us. The Society is also looking for fresh blood for the committee so if you think you might like to stand please contact Bob or another member of the committee. It is always important that fresh ideas come forward to keep the Society moving forward. It is also important that we have people able to help out the Society at star parties etc.

Please also keep the articles coming. I need a wide range to keep a balanced issue and also with the PDF version we can publish more colour images. It may also be interesting to have some articles on how you observe. By this I don't mean articles on how you made your telescope but how you use it.

Just to round things off for those in search of an astronomy holiday somewhere where it might not rain this was recently found on the BBC website http://www.bbc.co.uk/news/world-latin-america-27064555