An Introduction to Visual Deep-Sky Observing by Faith Jordan 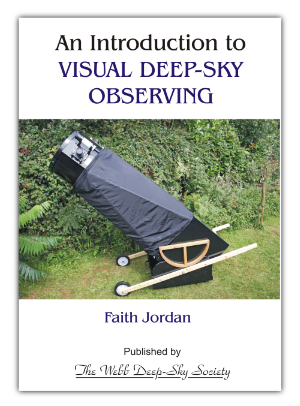 Firstly, what is the deep sky? The term deep sky means any object (usually non-stellar) which lies outside the Solar System and this includes star clusters, galaxies, nebulae, planetary nebulae and supernova remnants.

Deep sky observing is probably the most rewarding type of astronomy, and even more satisfaction can be gained by keeping records of what is seen. By compiling accurate and detailed notes and sketches, you can build up a record of your nights under the stars, and in the future you can read back over these. It is all too easy not to bother, but it is nice in future years to have something to look back on, to remind yourself of the things you have seen. Not only this, but by looking at the objects and making careful sketches and/or notes, you will become a better observer. This is because sketching and note taking forces you to really look at the object and study it, rather than just giving it a cursory glance and moving onto the next. When I started out in astronomy, I merely made lists of the objects I saw, but quickly found that this was not very satisfactory, and I also very quickly discovered that I could not remember what the object looked like!

People may be concerned that their observations may not be taken seriously if they do not have fantastic electronic gizmos to observe with, and some beginners tend to feel that they have to do some science. Not so. The point to be borne in mind is that astronomy is a hobby, and can be as scientific or as casual as the observer wishes to make it. Personally speaking, I have never felt the need to do shining science, but like anybody else, I like to share my observations. Drawings and visual notes are published in the Webb Society’s Deep Sky Observer magazine, and also by the British Astronomical Association’s Deep Sky Section, alongside astrophotographs and CCD images. Should you become really concerned about doing “serious work”, then there is plenty of time for that later, as you become a more proficient observer. Then you can become involved with variable star estimates, active galactic nuclei observing programmes … the list is long, and these things can be done visually. The golden rule here though is – go out and enjoy! After all this is supposed to be a hobby!

You should also consider joining your local astronomical society. Details of contacts can often be obtained from the local public library, or from the Federation of Astronomical Societies (address on page 36). However useful books may be, there is no substitute for chatting to people who have the experience to answer your questions and to discuss how they approach observing. You will find many shades of opinion on almost all subjects but there will certainly be some among their number who can help you.

At this point, the question may be asked: why bother with visual observing? Why not go out with a camera or a CCD camera? Well, there are several reasons. Firstly, for visual work, all you need, apart from some form of optical aid, are a sketchbook, pencils, eraser and dim red torch, and this makes visual work far less expensive than other methods. Another reason is that a well executed drawing, done with care and attention, can reveal more detail than an astrophotograph or sometimes even a CCD image. The reason for this is that in attempting to get the faint detail in objects (such as Messier 42) photographically, the central regions can become overexposed, rendering the detail in those regions invisible.

At this stage, people tend to panic, thinking that they have to be expert artists to sketch deep sky objects. Not so. As with all things, skill is acquired with practice – the more you practice the better an observer and sketcher you will become. Who knows – you may never want to bother with that expensive CCD camera you saw in those glossy adverts!

Over the past decade or so, the advent of large ‘light bucket’ Dobsonians, and the CCD revolution, has enabled amateurs to view objects once thought to be the preserve of professionals. Newcomers to the hobby, on seeing the expensive looking equipment on view in magazines and at club observing sessions, may think that they need to spend a small fortune on a huge telescope to do any serious observing. Nothing could be further from the truth. To begin deep sky observing, as mentioned above, all that is required is optical aid, rigidly mounted, and a notebook and pencil. In this book, I hope to show newcomers what they can do, what they can see, and how to go about it.