A Visual Atlas of the Magellanic Clouds by Jenni Kay FRAS 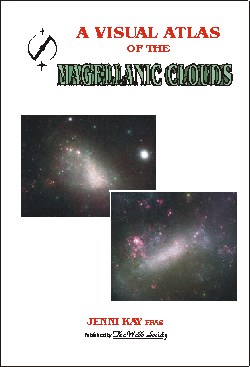 Making visual observations through the telescope of star clusters and emission nebulae in both the Small Magellanic Cloud and Large Magellanic Cloud is an ongoing project of mine. It all began in 1995 while I was using an 8-inch f/10 SCT, an instrument that is generally considered a rather common and small to moderately sized telescope. Late one night in September, after a full night’s observing in Sagittarius, I turned the 8-inch SCT towards the Small Magellanic Cloud, more out of curiosity rather than expecting to see much detail in it. To my surprise I found the SMC to be littered with numerous small hazy glows, all differing in size and brightness, but easy enough to pick out against the bright background glow of the Magellanic Cloud itself.

After sweeping through the SMC with the 8-inch SCT that night, I decided to begin a serious project to observe each and every NGC/IC cluster and nebulae in the SMC. Having slowly and carefully made my way through the SMC successfully, I then turned the same scope towards the LMC. I was astonished! Here, the fields were tightly packed with the glows from numerous clusters and nebulae, much more heavily crowded than what I had found in the SMC. Here was the next challenge, to systematically sweep through the LMC to observe and identify each NGC/IC cluster and nebulae.

The Magellanic Clouds are well placed for making observations in my skies for six months of the year. It took me two seasons, in the years 1995 – 1996, to make my way through both Clouds with the 8-inch SCT. And then I bought a larger telescope, a 12.5-inch f/5 Newtonian on a Dobsonian mount. Of course, this meant I had to review both clouds with the larger scope. This was really a pleasure!

One of the problems I encountered while working through the Clouds was the misidentification of some NGC/IC objects. Sometimes the modern catalogues had given the NGC or IC designation to the wrong cluster or nebulae, as opposed the one intended by the original astronomer. After noticing that the modern object did not visually match the description as given in Dreyer’s NGC/IC catalogue, it was obvious there was a misidentification here. For example, say the modern object might have appeared very small, and extremely faint, but Dreyer described the object as a very large grouping of bright stars; this conflict in descriptions clearly indicated a misidentification of the object. Once an anomaly like this was noted, I would look up the original astronomer’s descriptive notes. In most cases it was Sir John Herschel who discovered the object and as he logged full descriptive notes on the object the identification problem was quickly sorted out. Using the example above, if Herschel described the object as a large, bright grouping of stars, then the NGC designation did not belong to the very small, extremely faint modern object. In fact, a visual observation through the telescope would show the large bright star group easily enough.

Having composed a report on the misidentification on such an object, and offering a correction for it, I posted the report via email to a group of expert people working on similar anomalies in the entire NGC/IC catalogue in general. (More can be found on the work done on this project at the Internet website : http://www.ngcic.com/ngcic.htm.) After further analysis and a brief discussion they confirmed the corrected identification. A chapter on these corrections can be found following the visual observation chapters on the SMC and LMC.

The following observations were made from my semi-rural home site at Lobethal, SA, Australia. Here, the typical limiting naked eye magnitude is 6.1, with the seeing rated at Antoniadi II-III. The eyepieces used in the 8-inch f/10 SCT were:

The same eyepieces in the 12.5-inch f/5 Newtonian rendered: