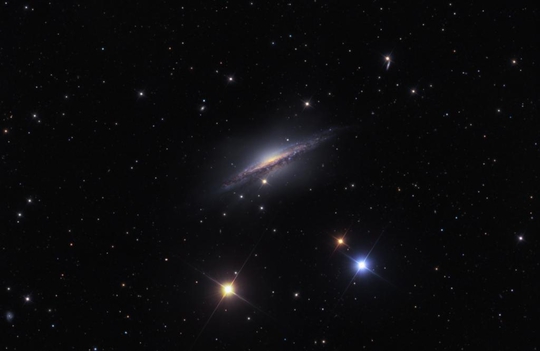 Image Courtesy of Ken Crawford, California. For more images from Ken Crawford please visit the Rancho Del Sol Observatory website. You can click on image for a high resolution version, or download a copy of our Megastar© Finder Chart of the NGC 1055 and M77 region.

NGC 1055 was first discovered by William Herschel in 1783 from Slough. It is an edge on spiral galaxy not dissimilar to M104 (the Sombrero) in Virgo. The dark dust lane and bright star forming regions are believed come from its interaction with the nearby spiral galaxy M77. Indeed a low power eyepiece view will show both galaxies in the same field as they are only separated by about half a degree (a full moons width).

There is a nice image showing galaxies at NASA's APOD. The interaction with M77 also means that NGC 1055 is a bright infra-red and radio source. Images in the ultraviolet by the GALEX satellite show the blue star forming regions very clearly even though they may be overshadowed by the dust lanes. The disk as indicated by the dust lanes appears warped which is also probably a result of the interaction. NGC 1055’s nuclear region also shows some of the properties expected form a LINER galaxy although it is not clear if it is one. It does appear quite boxy and large.

Detailed images of NGC 1055 show structures in its halo that may well be star streams from disrupted companion galaxies.

The M77 group is about the same distance from us as the Virgo cluster but in a different direction. Visually NGC 1055 maybe more challenging to get details out of than images may suggest and although it may be seen in relatively small telescopes to see any detail is likely to require a telescope of 30cm or above aperture in typical UK skies.