NGC 5248 in the Constellation of Bootes 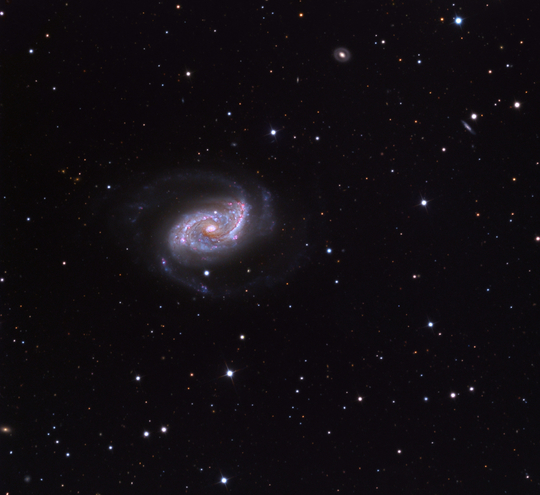 Hunting galaxies in mid northern climes in June is a challenging affair as the skies never really get astronomically dark. For this month’s object then I have chosen the bright galaxy NGC 5248.

NGC 5248 is in the constellation of Bootes but is actually part of the Virgo cluster of galaxies. NGC 5248 has its own small group which contains two other faint UGC galaxies and the group itself is part of the Virgo III group. The Virgo III chain consists of at least 8 groups of galaxies stretched into a chain at least 40 million light years long by the intense gravitational pull of the main Virgo cluster.

NGC 5248 itself is a spiral galaxy seen at an angle of about 45 degrees. It is classified as a grand design SAB spiral with a short bar. However recent observations in the near infra-red have shown that in fact there may be a much longer bar with intense star formation which may be driving the spiral arms outside it. These spiral arms also appear to have a large amount of star formation going on as can be seen from the numerous HII regions in its spiral arms and the strong blue colour. Interestingly there maybe two spiral patterns, one in the nuclear regions and one in the outer reaches of the galaxy.

As perhaps expected NGC 5248 was discovered by the indefatigable William Herschel in 1784. The distance to NGC 5248 is not as well defined as it might be but is at about 55 million light years. At this distance the galaxy itself is perhaps 120,000 light years across, so a bit larger than our Milky Way.

Shining at 10th magnitude NGC 5248 is visible in small telescopes although it may require a dark sky free from light pollution. A 10-20cm telescope will show the bright core but larger apertures will be needed to show any of the spiral structure. This is due to the fact that although the total brightness is quite high of NGC 5248 its large size means that its surface brightness is quite low. Large telescopes may also be able to pick up the other two much fainter members of its group, UGC 8575 and UGC 8829 which are half a degree east and half a degree south respectively from the NGC 5248.