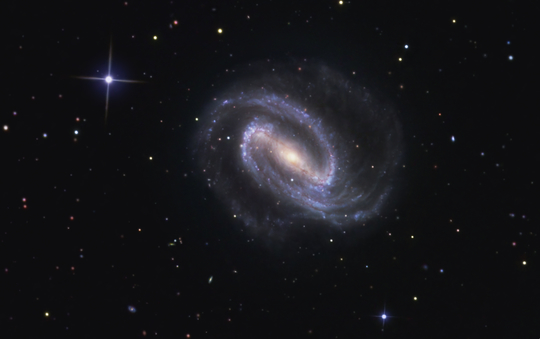 Image Courtesy of R Jay GaBany, USA. For more images from R Jay GaBany please visit the Cosmotography website. You can click on image for a high resolution version.

Most of the galaxies we have covered so far in the galaxy of the month column have been primarily aimed at northern observers. This month’s object is perhaps aimed more at mid northern observers. NGC 1300 lies in the constellation of Eridanus and was discovered by John Herschel in 1835 using the 18.7" reflector from his observatory at Feldhausen on the Cape.

It is a classic barred spiral that has, amongst other things, the distinction of being one of the largest images of a single galaxy made by the Hubble Space Telescope. It is often touted as the finest example of a barred spiral, although many would suggest the great Fornax spiral NGC 1365 is a better example.

The galaxy is unusual for a spiral in that it does not appear to contain a black hole at the centre. The main features of the galaxy as can be seen is that it is a barred spiral, however detailed observations of centre disk of the galaxy suggest it shows its own grand design spiral pattern which does not necessarily tie up with the larger pattern. This structure is actually not that unusual in some of the larger barred spirals.

The NGC 1300 lies about 69 million light years away and appears to be part of the Eridanus galaxy group (Or Fornax II cluster) which is in turn a sub group of the Eridanus Cloud. This is a loose cluster of galaxies that appears to include about 200 galaxies that are condensing out of the general Hubble flow. The Eridanus Cloud also includes as a separate subgroup the better known Fornax cluster. The majority of galaxies (70%) in the Eridanus cloud appear to be either spiral or irregular. The size of NGC 1300 at a suspected 110,000 light years puts it at about the size of our Milky Way galaxy.

Observationally from northern latitudes NGC 1300 is going to be a challenge as it is always going to lie low on the southern horizon. Using a 15" telescope shows a nice bar with a bright core surrounded by a haze even though the altitude of observation was only about 19 degrees. Observations with larger telescopes and from more southerly location suggest that it will show nice spiral arms along with some detail in the spiral arms. In the same medium power field of view there is also the tight spiral galaxy NGC 1297 which is also part of the same group.