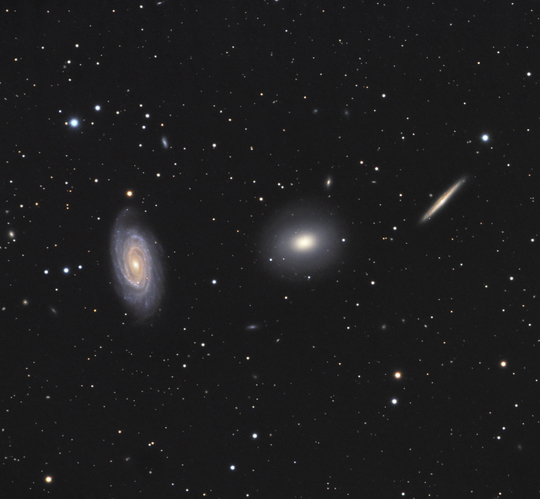 Image Courtesy of Dr. Dietmar Hager, Austria. For more images from Dietmar please visit his Stargazer Observatory website. You can click on the image above for a larger version.

Not as well-known as the Leo triplet NGC 5981, 5982 and 5985, collectively known as the Draco triplet are a fine group of galaxies high in Draco.

Unlike the Leo triplet however these galaxies are probably not related and reside at different distances so the triplet is purely a line of sight effect. NGC 5985 is about 120 million light years away, NGC 5982 about 130 million years and the small edge on NGC 5981 about 100 million light years away. However given the errors in astronomical distance measurement they could still be related.

NGC 5985 is an almost face on spiral and probably the easiest of the group so see. It is classified as a Seyfert type 1 galaxy with an active black hole at its nucleus. It is also classified as a LINER.

NGC 5982 is classified as an elliptical galaxy class E3. Although it looks quiescent now deep images reveal shells surrounding which are the results of a merger with another galaxy. These shells were found in the optical but were among the first to be discovered in the mid infra-red using data from Spitzer. NGC5982 may also be an active galaxy hiding a black hole. The merger probably happened about a billion years ago. Although it is an elliptical galaxy it also contains a young population of stars, perhaps as a result of the merger. Both 5985 and 5982 are visible in telescope as small as 15cm from a dark site.

NGC 5891 is very much fainter and an edge on spiral galaxy. It may be possible to see the dust lane with large telescopes. It appears smaller than it should and may have a large dark matter halo which has truncated star formation at larger radii. If you find NGC 5981 easy to find then try for NGC 5976, classified as a lenticular and a blue magnitude of 15.8 (so probably about a mag brighter in the visible) this provides a fine challenge to end with. Note however that it was also discovered by Stoney who called it eeF whilst he only thought NGC 5981 was F.

All four galaxies should fit in the same medium power field but from calculations I think that you may need a telescope with an aperture of 45cm or above to see NGC 5976, certainly from the UK. A good finder image showing the triplet and identifying the galaxies will help.