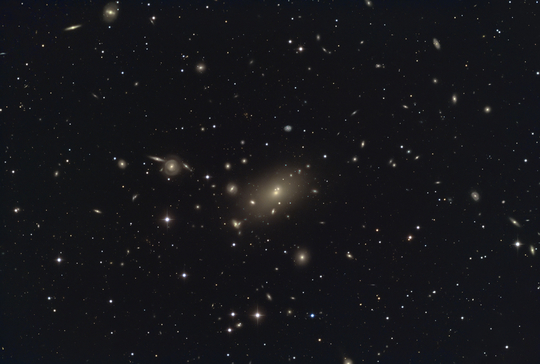 Image Courtesy of Volker Wendel, Stefan Binnewies and Josef Pöpsel. For more images from the Capella Observatory please visit their website. You can click on image for a larger version.

There is a much fainter NGC galaxy in this group: NGC 6158, which was also discovered by William Herschel but four years before he found NGC 6166. One wonders how he missed the much brighter galaxy the first time around.

NGC 6166 appears to be a quadruple galaxy with four cores. The four objects however appear to have very different redshifts so they may in fact just be superimposed galaxies. Modelling suggests that there are two elliptical galaxies here and one of them appears to have caused a wake as it passes through the outer envelope of NGC 6166.

Unusually for an elliptical galaxy there appear to be large dust cloud features in NGC 6166. Unlike the giant elliptical M87 however it does not appear if NGC 6166 has a very large globular cluster system. This is to be expected if, as believed, cD galaxies such as NGC 6166 are built up from mergers.

If we take the distance to the cluster to be about 410 million light years this give a size of 225,000 lights years for NGC 6166. Despite its brightness compared to the other galaxies in Abell 2199 it is certain that it is a member of the cluster and one of the largest galaxies known.

The cluster contains at least 88 and probably of the order of 200 galaxies. It is also one of the classic cooling flow clusters. Here the gas in the centre of the galaxy cluster cools rapidly causing hot gas (a few million degrees) to flow into the centre and then cool emitting lots of X-Rays.

Note that the galaxies here will not be easy targets. NGC 6166 is about 12th magnitude and as such should be visible in a 25cm telescope but to see more galaxies may require a 40 cm or greater. There are good finder charts and some drawings and descriptions of both of these clusters in Volume 5 of the Webb Society Deep Sky Handbooks.