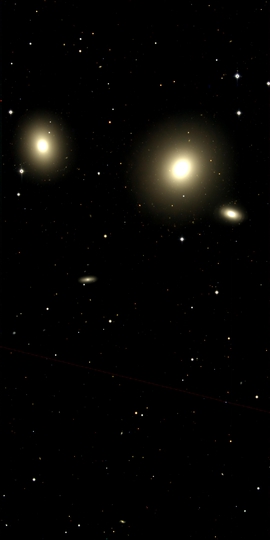 Image Credit - Prof. Duncan A. Forbes, Swinburne University of Technology, Australia. Click on the image above for a larger version or visit Prof. Forbes web pages for more of his images. We also have a Megastar© chart of the NGC 3607 region.

Our challenge for February is the galaxy group associated with NGC 3607. There are 3 galaxies intimately involved with this group which are NGC 3607, NGC 3608 and NGC 3605. The first two should be relatively easily seen in small telescopes.

NGC 3607 is classified as SA(0) which is a lenticular galaxy. These are galaxies that appear to have the luminosity profile of a spiral but have no (or little) gas and dust and are normally found in clusters. NGC 3608 is an early type elliptical. It would appear that NGC 3607 and NGC 3608 are interacting and that the former maybe stealing material from its neighbour. Backing this theory up is the fact that NGC 3607 is a low luminosity active galaxy.

NGC 3505 is much fainter and will require a larger telescope to see. It is also an elliptical galaxy but with a classification of E5 much more squashed. It is probably not associated with 3607 and 3608 but a background galaxy.

The NGC 3607 group contains perhaps 14 galaxies and is part of the much larger Leo II groups of galaxies. This is a collection of small galaxy groups, probably not that much dissimilar to our own local group at a distance of perhaps 70-90 million light years. There appear to be 11 major groups in the Leo II cluster along with a number of other NGC galaxies. They are all part of the Virgo cluster.

In the same medium power field as NGC 3607 there is also the galaxy NGC 3599 which is another relatively bright lenticular. All of these galaxies were discovered by William Herschel in 1784. NGC 3599 is not physically associated with the 3607 group.

Much closer in to NGC 3607 is the very much fainter galaxy MCG +3-29-18 which at magnitude 16.3 is going to be a challenge for large scope observers and is perhaps more suited to imagers. This is also probably a background galaxy.

NGC 3607 itself is a part of the RASC’s (Royal Astronomical Society of Canada) finest NGC list and as such should perhaps be better known that it is. The brightest galaxies in the NGC 3607 group are NGC 3607, NGC 3626, NGC 3686, NGC 3608 and NGC 3684. Because of its relative nearness the group spreads across perhaps 4 degrees of sky. If you like galaxy trios then NGC 3681, 3684 and 3691 are also a nice trio of galaxies that should show in the same medium power field with a medium sized telescope.