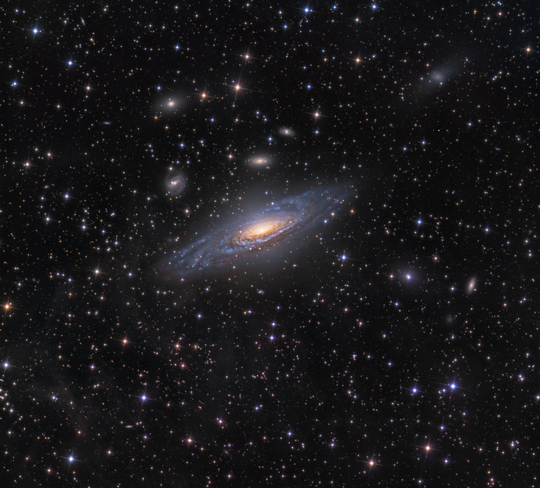 Often suggested to be a twin of the Milky Way NGC 7331 is a steeply inclined spiral galaxy in Pegasus. Missed by Messier it was discovered by William Herschel in 1784 and is the brightest member of the NGC 7331 group of galaxies.

This small group consists of NGC 7331, NGC 7320, DDO 213 and an anonymous galaxy. The group appears to be projected onto, i.e. in front of Stephans Quintet. The group also appears to be gravitationally stable. The galaxies in the group are separated by a fair distance on the sky, DDO213 being about 1.7 degrees from NGC 7331. This is because of the relative closeness of the group to us: at a distance of perhaps 45-50 million light years.

Note that none of the apparent companions, known as the fleas, are associated with NGC 7331 but are merely background galaxies. NGC 7331 itself is classified as a supergiant SA(s)b galaxy of luminosity class I-II. The visual association of galaxies has also got the nickname (at least in North America) of the Deer Lick Group. A fine image of the whole grouping can be found at NASA's APOD.

The NGC 7331 is interesting in many ways because the bulge of the galaxy appears to be rotating in in the opposite sense to the disk, something that is difficult to explain if this has been the case since the galaxy's formation.

Although earlier I stated that NGC 7331 may be a twin of the Milky Way it size and mass indicates that it may be much larger and perhaps more similar in size to M31.

Despite its size only one supernova has been observed in it in 1959 so perhaps it is overdue for another. Intriguingly it appears to contain a super massive black hole and may be a weak type of AGN known as a LINER. NGC 7331 was also chosen as one of the first galaxies to imaged by Spitzer as part of its infra-red survey. The images showed that the galaxy had a ring of dust and gas girdling the nucleus about 20,000 light years out. The rings mass was estimated at 4 billion solar masses. Observations in the ultraviolet from GALEX by contrast only show the star forming regions in the spiral arms.

For visual observers NGC 7331 is a pretty easy target. It should be visible in binoculars from a dark site but a 100mm (4 inch) telescope shows it easily as a dim streak. As you increase the aperture more detail in the galaxy becomes visible and the companions will also start to appear. I find them very dependent on the sky transparency as to how many you can see.

Although they all have NGC numbers most were discovered by Stoney in 1849, presumably using the 72" at Birr. NGC 7331 is also often used as a jumping off point for Stephans quintet which is only half a degree away.