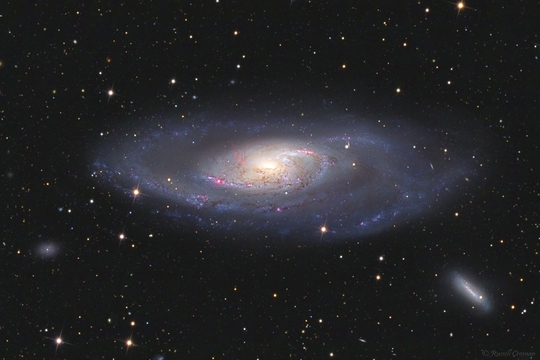 The galaxy Messier 106 in Canes Venatici was originally discovered by Pierre Mechain in 1781. It is however unlikely that Messier ever saw the object that now bears his name. It was added as the 106th object in his catalogue by Helen Hogg in 1947 along with M105 and M107 based on the fact that it was communicated to him and had been marked on one of his star charts.

M106 is a large spiral galaxy inclined to our line of sight that is has been classified as a Seyfert 2 type with an active nucleus and disturbed spiral arms, probably from an encounter with one of its neighbouring galaxies, possibly NGC 4217. It is also of interest because it appears to have two sets of spiral arms with those in the optical not matching up with those seen in the radio and X-ray. The radio and X-ray arms appear between the main optical arms as ghostly apparitions. M106 also has radio jets from the activity in its central region. And it is likely that these arms are being caused by the main jets being tipped at angle of 30 degrees to the disk and as they pass causing shock waves that propagate into the disk heating the gas.

The strong dust lanes block our views into the core of the galaxy in the optical. At a distance of perhaps 22 million light years it is also one of the nearest Seyfert galaxies with a supermassive black hole. The APOD image shows not just the galaxy but the H-alpha jets that appear to come out of the disk. M106 has had one supernova in the recent past in 1981K which reached 16th mag.

M106 is often overlooked by observers which is a pity because it is big and bright and being at around 9th magnitude can be seen in binoculars from dark skies. Larger telescopes will show increasing amounts of detail in the galaxy including the outer spiral arms and perhaps some of the star clouds and HII regions.

The immediate area around M106 also contains a large number of other galaxies that can be seen in amateur sized telescope. An identification chart from Megastar V5 shows the galaxies in the area. The two edge on spirals should be seen in relatively small instruments but the smaller ones may require a medium aperture telescope to see. All of these are, as expected, easy to see in my 22".

For a list of historical and current observations visit the DOCdb online database.