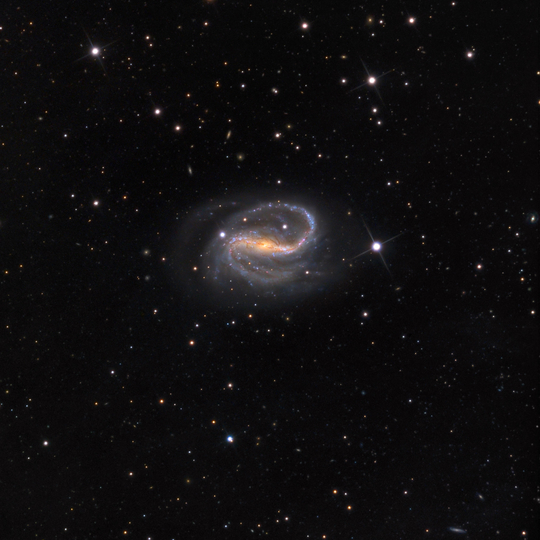 First discovered by William Herschel in 1784 NGC 7479 is a classical barred spiral galaxy. The orientation of the galaxy is almost face on making it one of the best barred spirals to observe from the northern hemisphere. Sometimes known as the Propeller galaxy it does however have some rather unusual features in that one of the spiral arms is much more prominent than the other. The spiral structure is also unusual in that the arms when observed in the radio spectrum appear to rotate in the opposite direction to those in the visible and near IR. This may have been the result of a merger with a smaller companion about 300 million years ago. The bar is also unusually long.

NGC 7479 is also unusual in that it is extremely isolated. Often starburst galaxies occur because the galaxies have been stirred up by close encounters with other galaxies but that appears not to be the case here. NGC 7479 appears to be at a distance of perhaps 105 million light years and may be associated with the Pegasus galaxy cloud. It is also thought to be about 150 thousand light years across.

Visually the galaxy has been picked up as a faint smudge in telescopes as small as 4" but it will take much a much larger telescope to show the spiral structure. The bar is relatively easy to see as in one of the spiral arms. The other is much more difficult. I find that the visibility of the arms depends very much on the transparency as well as the size of telescope. For those interested in doing the Herschel 400 project NGC 7479 is part of this list. More information on the Herschel 400 project and other Astronomical League observing programs can be found on their website. NGC 7479 was also well observed in the Webb Society Observer's handbook Volume 4 which contains descriptions from a wide range of telescopes.