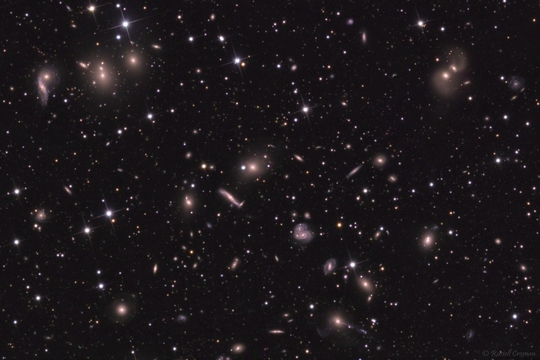 Image Courtesy of Russell Croman, click on image for a larger version. A detailed finder chart for the cluster is available along with a table of the galaxies.

The constellation of Hercules is perhaps more associated with globular clusters than galaxies but it does contain the spectacular cluster Abell 2151.

Unlike other galaxy clusters such as Coma (AGC 1656), the Hercules cluster is dominated by spiral galaxies. Many of the galaxies appear to be interacting as well and in many ways Abell 2151 represents what we think galaxy clusters may have looked like in the early universe.

Abell 2151 is however relatively close with a distance index of 1 and a distance of perhaps 500 million light years. It spans a fairly large area on the sky covering perhaps a degree with maybe a 100 galaxies in that area, the brightest of which are around 13.5 magnitude.

As such this is going to be a target for larger telescopes, probably in the 16-20" range but some of the brighter ones may be seen with smaller apertures.

The brighter NGC galaxies in the cluster appear to have had a variety of discoverers from William Herschel through Stephan and Swift, although there are also a collection of IC objects there, the majority discovered by Swift.

Steve Gottlieb’s observing notes on the cluster can be found on his website. Note however these were made by one of the worlds best visual observers with a large telescope form a very dark site. Visual observations of the clusters are also covered in the NSOG Volume 2.

Abell 2151 does seem to be a relatively popular target for imagers from the number of images available on the web, as always Google is your friend for finding these although the ones from Tony Hallas and Jim Misti along with Russell’s appear to be some of the best.

If you find Abell 2151 too easy then the other bright(ish) galaxy cluster in Hercules is Abell 2199 although this is a much more difficult challenge. As always if you observe this cluster then notes on the society newsgroup or to me would be appreciated. If you make this a project then the editor of DSO would love an article as well.