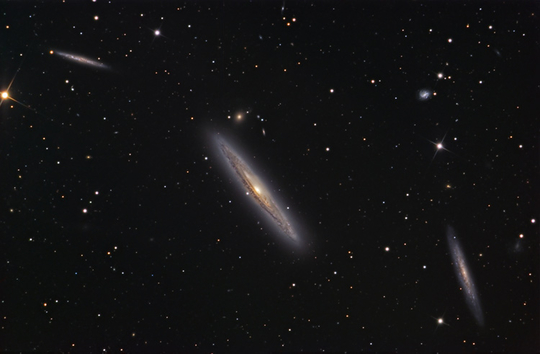 This image is courtesy of Johannes Schedler, Panther Observatory in Austria. Click on image for a larger version. We also provide a high resolution finder chart.

In order to try and revitalize interest in the Galaxy Section I have decided to try and post a Galaxy of the Month target. Observations both electronic and visual are encouraged of the object to be submitted either to the Galaxy Section Director, the Editor of DSO or on the Yahoo group. The challenges will vary between those visible for both new observers and those with larger instruments. Given that we are starting in February/March I thought I would start with an object from the Virgo cluster of galaxies and to go for a 3 in one challenge.

NGC 4216 is a bright (10.1 mag) edge on spiral galaxy classified as SBb which appears to be part of a small group of galaxies involved in the main Virgo cluster.

Through small telescopes you can see the core of the galaxy but as you move up in aperture not only does more detail appear in the galaxy itself, including the dust lane cutting across but also the neighbouring edge on spiral galaxies NGC 4206 and NGC 4222.

I remember coming across this group by accident when observing with Stewart Moore and a 24" in Tenerife and failing to identify it. We had got lost in Virgo by that time!!. For observers with very large telescopes there is also the small galaxy CGCG 69-113 in the same field.

There is a fine deep image of this galaxy showing the star streams from its merger with several smaller galaxies on the NASA APOD site and also a very nice image at Johannes Schedler's Panther Observatory website.

NGC 4216 is of interest as it appears to be blue shifted because due to its internal motion within the Virgo cluster. The galaxy itself is about 40 million light years away and is suspected to be a barred spiral galaxy but these classifications are always difficult when the galaxy is so edge on. NGC 4216 was discovered by William Herschel in 1784 and assigned by him to his class 1 objects.