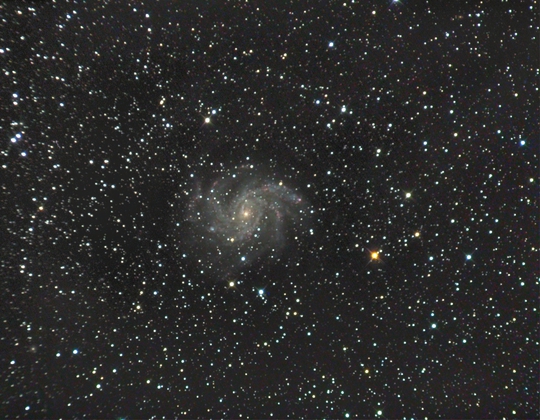 Image Courtesy of Dietmar Hager - Linz, Austria. Click on image for a larger version. For more images from Dietmar please visit his website.

The summer is perhaps not the best known season for galaxies but even in constellations better known for nebulae and clusters there are still some bright examples. NGC 6946 on the Cygnus /Cepheus border, better known as the Firecracker galaxy from the number of supernovae that have appeared in it, is one of these.

First discovered by William Herschel in 1798, NGC 6946 is a face on spiral, not dissimilar to M101, which I think would be better known if it was not suffering 1.6 magnitudes of extinction from within our own galaxy. Once believed to be a member of our local group NGC 6946 is now thought to be at a distance of 6.5 Mpc (20 million light years) and as such outside the gravitational radius of the local group. There does appear however to be quite a spread in the distance measurements with a number of sources suggesting it may be as close as 10 million light years (3 Mpc).

NGC 6946 appears to be undergoing a burst of star formation which is unusual in isolated galaxies because these are often triggered by interactions with other galaxies. As far as we can tell NGC 6946 does not appear to be associated with any other galaxy groups. This burst of star formation is probably also the reason that 6 supernovae have been seen in NGC 6946 over the last 100 years or so. NGC 6543 also contains a nuclear star burst which recent observations suggest may well be associated with the formation of a bar in the core of the galaxy.

The morphological classification of NGC 6946 is SAB (rs)cd, relating to its barred spiral nature The magnitude of the galaxy varies with waveband and a blue magnitude of 9.6 is listed in NED. Various sources however give NGC 6946 a visual magnitude of around 8.9. Despite this bright integrated magnitude NGC 6946 has a very low surface brightness due to its size (11.6’ x 9.8’) and it will be likely that a 22cm scope will be required to show any details of the spiral arms at all. Smaller aperture telescopes will show a faint haze and the core. Indeed it does look like a faint globular cluster. Larger instruments should be able to pick out the spiral arms and some of the HII regions that line them. The included finder chart shows some of these regions. A low power field may also show the cluster NGC 6939 to the North west and observers with large telescopes may be able to pick out the edge on galaxy UGC 11583 nearby as well.